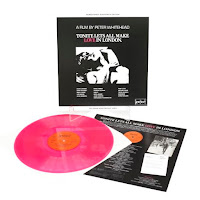 The British film director and pop promo auteur Peter Whitehead's kaleidoscopic 1967 documentary is a vivid and controversial snapshot of the height of London's “Swinging” era.

Featuring interviews with a diverse selection of iconic figures in British and international pop culture – from artists such as David Hockney and Alan Aldridge, through to actors such as Michael Caine and Julie Christie, the author Edna O’Brien, Beat Poet and writer Allen Ginsberg, and Rolling Stones manager and founder of Immediate Records, Andrew Loog Oldham, the movie is rightly regarded as both a celebration and critique of the London “Summer of Love”.


At its heart was a soundtrack album which featured renditions of “Interstellar Overdrive” by The Pink Floyd, “Here Come The Nice” by Small Faces, and contributions from the enigmatic Vashti Bunyan, Brit blue-eyed soulster Chris Farlowe and vocal duo Twice As Much.


Newly remastered from the original master tape, the album brilliantly captures the overheated atmosphere and ferocious pace of the times.