Subterranean Homesick Blues: A Tribute To Bob Dylan’s ‘Bringing It All Back Home 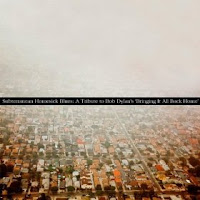 Reimagine Music is proud to announce “Subterranean Homesick Blues: A Tribute To Bob Dylan’s ‘Bringing It All Back Home.’ This 16 track album pays homage to the original release format, plus five little known bonus tracks originally recorded by Bob Dylan during Bringing It All Back Home sessions.
On its original release, “Bringing It All Back Home,” was a delicious and challenging step into the unknown, a platter that carried Dylan from the cultish fringes to the popular mainstream. Released in March 1965, it hit #1 on the UK charts and was his first Top 10 album in the US. Dylan’s song writing clearly stepped up a gear with this album simultaneously presenting a caustic cocktail of spiky emotions and an outpouring of angst that in many ways, signaled the end of that Greenwich Village coffee house career.
This tribute was produced by Jim Sampas whose work includes recent Billboard Heatseeker #1 album “Jay Farrar & Benjamin Gibbard - One Fast Move Or I’m Gone: Music From Kerouac’s Big Sur (Atlantic Records), This Bird Has Flown: A Tribute to The Beatles’ Rubber Soul with Sufjan Stevens, Low, Fiery Furnaces and others.
On choosing artists for the album Jim said, “Bob Dylan’s original album inspired The Beatles and so many other artists, to change their whole perspective on songwriting. It was also his moment of “going electric” with a full band on side one, a bold approach that caused quite a stir within the folk community. In selecting these artists, I’ve sought out people whose music also pushes boundaries. They far exceeded any of my expectations with such incredibly inventive new renderings, yet still managing to bottle that distinctive Dylan grit we all know and love.”
In keeping with the original album which had ‘electric’ recordings with full band on side one and ‘acoustic’ on side two, Sampas had the artists on the first half of the tribute record ‘electrically’ and those on second half all ‘acoustically.’


Subterranean Homesick Blues: A Tribute To Bob Dylan’s Bringing It All Back Home