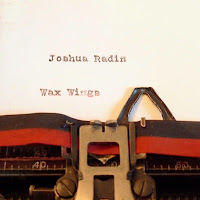 Cleveland born, songwriter/performer Joshua Radin announces his upcoming SELF – RELEASED LP Wax Wings, coming May 7, 2013. The label favorite chose to independently release his fifth studio album. Radin has sold more than 1.5 million singles, half a million albums and has over 75 songs placements in film and TV.

The title Wax Wings comes from Greek Mythology and the story of Icarus and his attempt to escape from Crete (the largest of the Greek Islands) by means of wings that his craftsman father constructed from solely feathers and wax. Icarus ignored instructions not to fly too close to the sun, and in the process came too close, which melted the wax. The melting wax caused him to fall into the sea where he drowned which today bears his name, the Icarian Sea. Radin followed the same path of flight with this album… letting curiosity guide his path in order to conquer the sky.