Imagine stepping back into the 70's, but you are still in 2013 and feel that a new time for music has started... 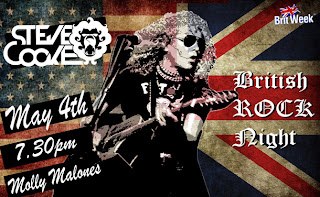 On May the 4th it will be time to turn up the volume and enjoy some British rock n' roll! A highly charged group of renowned British players, including Steve Cooke on vocals, will perform at this year's BritWeek musical event. Previous BritWeek performers were i.e. Joss Stone & Duran Duran.

Founded by Nigel Lithgoe, BritWeek hosts a program of events promoting British creativity, innovation and excellence in California. They attract support from thousands of people, including international celebrities like Sir Anthony Hopkins, Jane Seymour, as well as business and political leaders like Sir Richard Branson and Tony Blair.

Steve Cooke, whose musical background includes renditions of The Who's "Tommy" and Led Zeppelin's "The Song Remains the Same" will be leading the audience through the night with his powerful vocals and twelve-string guitar playing.

Cooke is best known in Los Angeles for his Americana Rock song "Working for the USA", which won him Best Song and Best Rock Album last year. He is now concentrating on his new sound with strong British influences and will be joined with special guest performances by legendary British drummer Steve Ferrone (Tom Petty, Eric Clapton, Average White Band) and Kofi Baker, son of legendary drumming icon Ginger Baker (Cream). The group will also be joined by a well known British guitarist, TBA.