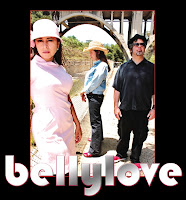 LA's most talked about female fronted rock trio, bellylove, just released their highly anticipated fifth CD. A well-respected musical presence on the Los Angeles music scene, bellylove's new CD 'Circles and Darkness', featuring Lisa Black (guitar) and Toni Valenta (vocals and bass), with Adam Steinberg (drums), is guaranteed to wow and amaze all who listen! With eclectic covers ranging from Frank Zappa, Black Sabbath, Pink Floyd and Cheech and Chong (yes! Cheech and Chong), along with some exciting originals penned by the group, bellylove is the band to keep an eye out for in 2012!

“This band plays from the deepest part of themselves with truth and audacity. I love their music. It is both transcendent and adventurous.” - Michael Des Barres

Formed on the heels of Lisa Black's debut as guitarist with legendary '80s LA female punk band The Pandoras, and the resulting groups Feline (with members of the Pandoras) and Hardly Dangerous, bellylove began their journey in 1998. Toni Valena is a multi-talented singer/songwriter who plays guitar, bass and drums. She can nail Zeppelin to a tee and writes amazing, thoughful, heartfelt lyrics. bellylove is her baby – she coined the name. “Music has always played an important role in my life,” says Toni. “Music gave me sanctuary when I was a kid. I could get lost in the lyrics and voices of the songs I loved the most.”

Lisa and Toni released the self-titled EP 'Bellylove' in 1998, which atracted the attention of Joss Whedon, creator of the 'Buffy The Vampire Slayer' TV series. “Joss Whedon thought the song was perfect for a scene in the Season 3 (Sept. 1998) Premier episode: Anne,” Toni recalls. “Buffy had run away and was having a deep introspective moment, finding her way back to freedom. We had no idea or intention of any of it happening. Their people contacted us and not only did our song appear on the episode, we got to 'perform' on the set at The Bronze (club). I had never even played a show before appearing on Buffy! It was very exciting for us – we got to meet several of the cast members and see how they made TV magic happen.”

Bellylove went on to record another EP in 2004 (High on the Wagon) and a compilation of many EP's on CD in 2007 (Peace Love and Understanding). In 2003 the band travelled to Florida to open for Ani DiFranco at the Calliope Fest in 2003. Drummer Adam Steinberg was recruited for the duo's live act and new CD. “We play for the love of music,” says Adam. “Taking a really diverse conglomeration of influences both musically and socially and channeling them through a classic power trio format and playing from the heart.”

The band's musical influences, as witnessed by the covers included on the new CD, range far and wide. Lisa's influnces include Frank Zappa, Mick Ronson, Mick Mars and Billy Zoom of X to name a few. “I really fell in love with the song 'Apostrophe' by Zappa when I first heard it and felt like I needed to figure it out on guitar,” Lisa explains. “The same with Zappa's 'Magic Fingers' from his 1970 film '200 Motels', with its fiercely crafted guitar riffs. The Zappa, Sabbath, Cheech and Chong selections on the new album were a group effort.” Toni's influnces include The Beatles, Nicolette Larson, Bob Welch, Black Flag, X, Led Zeppelin, Black Sabbath and The Cult.

The new single from bellylove's latest release, the title track “Circles and Darkness” was penned by Toni and Lisa. “I am a huge Harry Potter fan,” explains Toni. “The lyrics are a nod to the book 'The Prisoner of Azkaban.'” Lisa adds, “I adore that song and love to play it live, it's exciting when the song climaxes at the end, It just leaves ya wantin' more!”