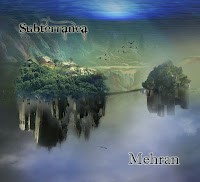 'Subterranea' is the name of newly released instrumental album by guitarist Mehran. Just like his first critically acclaimed CD, 'Angels of Persepolis', released in 2010, 'Subterranea' is a guitar oriented concept album along the cosmic lines of Pink Floyd under the influence of Flamenco guitar. The difference is this time, Mehran has further ventured into progressive rock territories, revisiting his musical roots and exposing his hard rocking past. For this album, Mehran formed a 4-piece band with Carl Kennedy on keyboards, Krushanu Joseph on bass and Sam Werk on drums, as opposed to his previous work that was recorded with 15 different studio musicians. This time around when you listen to Mehran's new work you can hear the same 4 musicians as a solid unit.

“Even though I have been playing Flamenco for a couple of decades, deep down I have always been a rocker,” says Mehran. “I grew up listening to Pink Floyd, the Doors, the Eagles and Led Zeppelin. On this album I wanted to reach deep inside myself and bring out what influenced me to pick up the guitar in the first place. I wanted to take that and deliver it with the same heavy backbone of any rock influenced band but play it with Flamenco guitar. My intention was to do something that is very unique but at the same time it has all the influences that shaped and formed my playing.”

The music on 'Subterranea' is not your typical rock sound although it can easily be categorized as 'Progressive/Alternative Rock' but most of the melodies are carried on a Flamenco guitar, yet with the intensity of Prog. That is Mehran’s formula for creating something as original as possible without turning off the audience by getting too complicated. The melodies and compositions on 'Subterranea' are sweet and memorable and the musical style is very atmospheric.

The concept behind 'Subterranea' is filled with fantasy, imagination and at times science fiction. The message however is social and political. “Subterranea is an imaginary, surrealistic and utopian society that lies a few thousand miles beneath the earth,” Mehran explains. “It exists in a different dimension than one we humans live in. The inhabitants are mirror images of the modern man yet on an opposite path from us. As we, humans, are moving toward weakening the earth’s axis and our rulers run our societies with greed, aggression, exploitation, and have nearly brought the world to an spiraling collapse, Subterraneans are moving toward transcendence, longevity and live in harmony with nature. Pride and ego are meaningless concepts to them. Humility and selflessness are the bases of their being. Symbolically, Subterranea is a constructive social criticism. It is a yearning for a better society and a glimpse into an alternative reality for mankind.”

Mehran's skillful guitar work on 'Angels of Persepolis' gained him a reputation as a solid and highly expressive performer and composer. Following this release he was featured in a full page write-up in the February 2011 issue of Vintage Guitar Magazine. He was also reviewed in their January 2011 issue where they wrote: “Mehran's soloing covers a lot of ground but even in the quickest passages, it's melodic. The solo on 'Korean Soup' mixes his Flamenco skill with jazz harmony where he solos flawlessly over nice changes.”

In Aug 2011 Mehran was featured in the NPR's World View program with an interview and a live solo performance. Other magazines in the US and Europe including Progression Magazine, IO pages of Holland and UK's Pipeline Magazine, to name a few, also wrote rave reviews on Mehran's playing. In conjunction with the release of 'Subterranea' Mehran has filmed a new innovative video for the song “Into the Abyss”. Says Mehran, “The video was created by a very talented friend, Carlo Serran. We decided to give it an underworld look so we rented the basement of a huge warehouse. We also wanted to give it a dark and edgy feel since the song has a heavy and serious air about it and is filled with lots of tension and release. The surprise at the end of the video and the little talk about the gravity of earth catches many off guard.”

Adding another dimension to Subterranea's conceptuality is the CD's sublime artwork. “The artwork was also created by a good friend of mine, Siamak Zarin Ghalami,” explains Mehran. “It shows a few green islands in the water that represent Subterranea. The shadows that they reflect on the water are buildings and high-rises that reflect our society. As the eye shifts to the right the buildings get older, representing passage of time. The islands are connected with rainbows however everything is submerged in water. The detail on the artwork and the way it delivers the message is truly stunning and really involves the mind of the observer.”