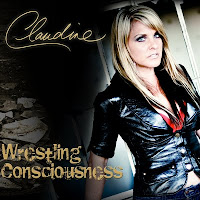 Much to the elation of fans around the world, San Francisco-based music artist Claudine is preparing to release her highly anticipated debut album 'Wrestling Consciousness'. With a sound that combines the sensibilities of Pink and Pat Benatar, Claudine is here to prove that good old fashioned rock music, with lyrics that explore the depths of the good, the bad and the ugly in life, isn't exclusively for the boys.


“My album spans a period of time in my life where I was searching to find my own value and purpose,” Claudine divulges, “and I am writing from a place, sharing some of those in my life who have made a strong impact, left their mark, if you will. We all have our journey, and though we may travel on different roads, we often share the same shoes as we experience similar perspectives in the human condition. My hope is that my fans can feel as though they are not alone, and that they may connect or find themselves in my lyrics, and in my music.”


Claudine’s vocal performances are powered by natural talent along with life experience that she vividly brings to the stage. The talent behind her helps to further define her message.  Isaac Bolivar, on lead guitar, with a memorizing touch on his strings, a young, yet seasoned talent, has toured with “Taking Back Sunday,” a Warner Brother’s act playing for tens of thousands of fans worldwide. She is also backed by another bay area great, Jason Wall, on drums; endorsed by both Pearl drums, and Zildjian cymbals, who always takes command while seated behind his kit, playing with power, precision, and a distinct energy that is infectious.  Mark Kenoly, who has been on the music scene for many years, and has a Grammy nomination under his belt, not only produces Claudine’s music, but also performs bass, adding texture and depth to every piece.


Here's what veterans in the industry are saying about Claudine:


“Something in the way she sings, attracts me like no other!” - Steven Seaweed, Bay Area's #1 rated midday radio personality / 107.7 The Bone


“Claudine's music is honest and unapologetic. Clearly taking a lifetime worth of experience, she has come out with something to say. My hunch is, this is an album people are going to pay attention and relate to. Her enthusiasm and determination to make music, her career leaves no doubt in my mind that she will carve out her own way to succeed in this business.” - Jimmy Cantillon (co-founder: Cantillon Entertainment Group)


“Claudine is a gifted singer and prolific songwriter that has blended modern and retro elements to create music that has depth, and deals with many of life's issues, asking some tough questions. Her strong, confident voice, offers power and dynamic range, found in many of her harder hitting tracks. She also has the versatility to balance the edge with a more vulnerable approach heard in her contemplative ballads. The raw emotion is revealed in her vocal performances, and gives us a peek inside. She has surrounded herself with some strong musicians and a talented producer in Mark Kenoly. Her music is definitely worth checking out!” - Tim Abbott - Producer and member of legendary music group the Chocolate Watchband


With such diverse subject matter explored in Claudine's songs, one wonders where her inspiration is derived. “I am inspired by a number of things,” Claudine explains, “something as simple as a single word, an image or photograph, a phrase, or an emotion. It can come from the work of other artists that I admire, and event or experience in my own life, or even one that has been shared, and remains with me.”


Along with the release of 'Wrestling Consciousness', Claudine has other ideas in store: “I do plan on releasing my first music video for my ballad 'If I Ran To You'. There are actually two filmed versions of the song, and I will allow my fans to choose the one that they like the best! I am planning to have a CD release party in late summer or early fall, and am hopeful to do a little touring on the west coast.”