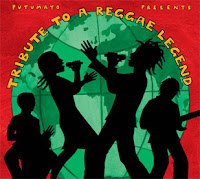 Tribute to a Reggae Legend, a global celebration of the music of Bob Marley, is coming out on July 13th.
Few people have made the kind of lasting, universal impact that Bob Marley has made with his music. In his short 36 years, Marley managed not only to introduce hundreds of millions to reggae but also spread powerful messages of peace, love, human rights and acceptance. It’s no surprise that almost 30 years after his death, one can travel to any part of the globe and witness his far-reaching musical legacy.
Bob Marley would have been 65 in 2010, and in celebration, Putumayo World Music is releasing Tribute to
a Reggae Legend, a multi-genre album featuring artists from around the world performing many of his best loved songs. The collection is the first tribute album Putumayo has produced and its first with five exclusive,
original tracks.
Artists who recorded songs for this release include Sierra Leone’s Refugee All Stars, a group of refugees
displaced to Guinea during the Sierra Leone civil war. They beautifully harmonize on a poignant interpretation
of “No Woman, No Cry.” South African Afro-fusion band Freshlyground contributes an original recording
of “Africa Unite,” demonstrating their signature mix of African folk, kwela and jazz. Original recordings
of “Could You Be Loved” by Québecois singer Caracol (formerly of the group Dobracaracol), “Natural
Mystic” by California reggae/rock band Rebelution and “Sun is Shining” by Ghanaian reggae artist Rocky
Dawuni, add to the diversity of the collection.
A rising international star, Brazilian singer-songwriter Cèu blends elements of bossa nova and soul in a tranquil
rendition of “Concrete Jungle.” The multi-ethnic group Playing for Change incorporate many instruments,
styles and languages in “One Love,” emphasizing the recurring theme of universal love found in many of
Marley’s songs.
The album also features Honolulu-based reggae band Three Plus (“Is This Love”), New England bluegrass,
folk and country band Northern Lights with Jonathan Edwards (“Waiting in Vain”), Caribbean, Indian
and African fusion band Funkadesi (“Real Situation”), Hawaiian singer-guitarist Robi Kahakalau (“Do it
Twice”) and Canadian pianist and singer-songwriter Julie Crochetière (“Mellow Mood”).
Tribute to a Reggae Legend is the newest addition to Putumayo’s successful reggae series, which includes
African Reggae, World Reggae, Jamaica: Reggae Homeland and Reggae Playground.