TINSLEY ELLIS TO PERFORM IN OMAHA 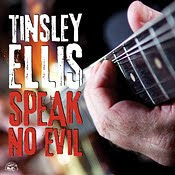 Tinsley Ellis is one of the most electrifying blues rock guitarists and vocalists on the scene today. Tinsley is on tour to promote his brand new CD, Speak No Evil, and will perform on Thursday, March 4th at the New Lift Lounge in Omaha.
Produced by Ellis, Speak No Evil is the most guitar-driven album of his career and features Tinsley's fiercest, most brutally honest and hard-hitting original songs to date. And as you'd imagine, the guitar work is positively stellar. Speak No Evil is as wide-ranging and inspired a recording as Ellis has ever made, and one of the most satisfying Southern blues-rock albums in ages.
Billboard magazine declared, “Atlanta's Tinsley Ellis sings like a man possessed and wields a ferocious lead guitar...one of today's premier blues/rock players," while Rolling Stone says Tinsley plays "feral blues guitar... non-stop gigging has sharpened his six-string to a razor's edge...his eloquence dazzles...he achieves pyrotechnics that rival early Jeff Beck and Eric Clapton."
Don't miss this show!
Thursday, March 4th
New Lift Lounge
1311 S. 90th St .
Omaha, NE
403.339.7170
5:30 p.m.
$12