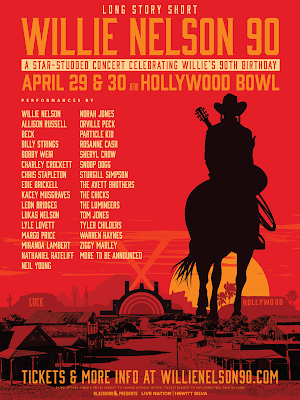 Blackbird Presents and Live Nation Hewitt-Silva are thrilled to announce a two-day concert honoring a generational icon - Long Story Short: Willie Nelson 90, A Star-Studded Concert Celebrating Willie’s 90th Birthday. The shows will take place on Saturday and Sunday, April 29 and 30, 2023, at the legendary Hollywood Bowl and is being billed as one of the biggest music events of the year. Each night will be a unique experience, featuring once-in-a-lifetime performances and unforgettable collaborations to be revealed at the show.

"I can’t think of a better way to spend my 90th birthday than being surrounded by family, friends and of course the fans who made this all possible," says Willie Nelson. “It's an honor to perform with such an incredible group of artists at such an iconic venue.”

Two-day packages for the general public go on sale Saturday, Jan. 28, at 10 AM PT at http://ticketmaster.com. All eligible Capital One Visa and Mastercard credit and debit cardholders will have access to exclusive presale tickets before the general public beginning Wednesday, Jan. 25 at 10 AM PT. For complete show details, including information on travel packages, go to willienelson90.com.

With a career spanning an incredible seven decades, Nelson is widely recognized as one of the greatest and most influential artists in the history of popular music. A true living legend who has built a globally celebrated career as a musician, author, actor and activist, Nelson turns 90 years young, as vibrant, active and dynamic as ever. This year alone, as the definitive five-part documentary film on his extraordinary life and career is set to premiere at the 2023 Sundance Film Festival, Willie released several new albums (receiving four new nominations for the 2023 Grammy Awards), authored his latest book and continues to perform across the country while also headlining iconic festivals including Farm Aid, July 4th Picnic and his Outlaw Music Festival Tour.

Email ThisBlogThis!Share to TwitterShare to FacebookShare to Pinterest
Labels: #willienelson90