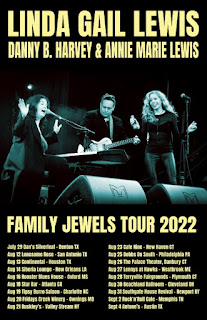 Fresh from the release of the Early Sides 1963-1973 CD collection as well as the concert CD/DVD Family Jewels, rockabilly pioneer Linda Gail Lewis is hitting the road for a new set of exciting live performances! Lewis, who is the sister of “The Killer” himself, icon Jerry Lee Lewis, was a frequent collaborator and singing partner with Jerry Lee before going on to blaze a path of her own, releasing several solo albums as well as working with Van Morrison among many other luminaries.

Accompanying Lewis on stage each night will be her supremely talented daughter, singer Annie Marie Lewis, who has kept the family tradition alive with her fiery vocal prowess as heard on her recordings with Devil’s Daughters and her own solo work. Backing up these two energetic vocalists will be Annie’s husband, rockabilly guitar superstar Danny B. Harvey of The Rockats, Swing Cats, The 69 Cats and more! Together this trio will honor not only the songs and sounds of early rock n’ roll but also the Lewis family lineage that played an enormous role in creating those sounds. Come and see the closest thing to American royalty – The Queen and Princess of  Rock N’ Roll!