A Stellar Line-Up of Guests Help Legendary Garage Rockers THE GRASS ROOTS Recreate Their Most Iconic Hits on New Collection! 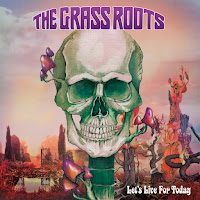 The Grass Roots were one of the biggest American hit makers of the late ‘60s and early ‘70s, crafting a sound that was both perfectly situated in its time and yet also somehow timeless. Songs such as “Let’s Live For Today,” “Sooner Or Later” and “Midnight Confessions” made the band a staple of AM radio and helped transition popular music from the psychedelic sounds of the ‘60s to the more muscular classic rock of the ‘70s.

Now a slew of both their peers and acolytes have come together on a unique career retrospective of The Grass Roots called Let’s Live For Today. Set for release on all formats on September 9, Let’s Live For Today features mixes and performances by The MC5's Wayne Kramer, NY garage revivalists The Fuzztones, TX psych band Night Beats, Canadian alt-country rockers Dead Ghosts, UK sensations The Courettes and electronic duo The KVB. Each of these artists bring their own unique talents to bear on The Grass Roots legacy – just witness the stellar version of “Wait A Million Years” from the band’s 1969 Leaving It All Behind album crafted by retro rock duo The Courettes, which is being released to all platforms today!

Email ThisBlogThis!Share to TwitterShare to FacebookShare to Pinterest
Labels: The Grass Roots