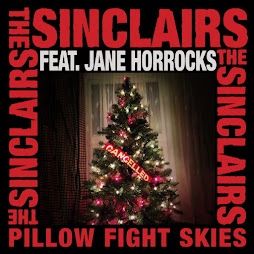 What do an actress/singer and a pair of musicians do when theatres, music venues and film sets are shut down for the best part of a year? They dream up a Christmas record that sounds like no other! The Sinclairs, the neo-psych punk-surf project of The Damned’s Rat Scabies and Flipron’s Billy Shinbone, return to bring you a very 2020 Christmas single and video - out now via Cleopatra Records! The track, “Pillow Fight Skies,” features multi-award-winning actress Jane Horrocks on vocals.
Horrocks, best known for her work on the UK comedy phenom Absolutely Fabulous and for earning a Golden Globe nomination for her role in The Rise And Fall Of Little Voice, shows off her powerful voice as well as her comedic chops in the video for the track.

“I’d been speaking to Billy about this half-finished Christmas song that he had for The Sinclairs. He said it was about the most miserable Christmas ever,” says Scabies. “We needed a singer who could move effortlessly between misery, magic & charm. So I phoned Jane and it just fell together after that!”

Keep an eye out for a Sinclairs tour coming soon and check out the group’s full-length album, Sparkle:
https://orcd.co/the-sinclairs