Keyboard Legend Rick Wakeman’s “Return to the Centre of the Earth” Deluxe and Super Deluxe Box Sets are Now Available for Pre-order!

“Return to the Centre of the Earth” is a studio album released on March 15, 1999 on EMI Classics. The album is a sequel to Wakeman’s 1974 concept album “Journey to the Centre of the Earth”, itself based on the same-titled science fiction novel by Jules Verne. Wakeman wrote a new story of three unnamed travelers who attempt to follow the original journey two hundred years later, including the music which features guest performances from Ozzy Osbourne, Bonnie Tyler, Tony Mitchell, Trevor Rabin, Justin Hayward, and Katrina Leskanich. The story is narrated by Patrick Stewart. Upon release, the album reached number 34 on the UK Albums Chart.

“I AM IMMENSELY PROUD OF RETURN TO THE CENTRE OF THE EARTH, AS WHEN I LOOK BACK, IT APPEARS TO HAVE BEEN ALMOST SUICIDAL TO HAVE RECORDED AND RELEASED IT WHEN PROG WAS AT SUCH A LOW STATUS, BUT THANKS TO RICHARD LYTTLETON, THE PRESIDENT OF EMI CLASSICS, WHO BELIEVED SO MUCH IN THE MUSIC, IT WAS RECORDED TO THE HIGHEST STANDARD POSSIBLE AND I CAN HONESTLY SAY THAT WITHOUT HIM, THE MUSIC WOULD NOT EXIST TODAY.” - Rick Wakeman, UK 2020. 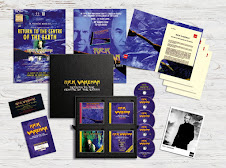 Return to the Centre of the Earth Deluxe Box Set