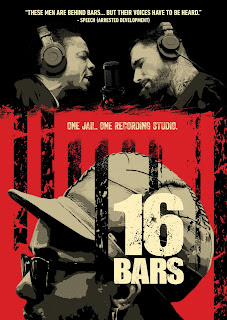 16 BARS is a documentary that explores a unique rehabilitation effort in a Virginia jail that encourages inmates to write and record original music. In a makeshift recording studio located in the Richmond City Jail, four men collaborate with Grammy-winning recording artist Speech (Arrested Development) on an album behind bars. As the creative process forces each of these men to confront their painful pasts, it also opens new doors to their futures. 16 BARS is a look behind the U.S. criminal justice system's revolving door, and at the issues of incarceration, rehabilitation, recidivism, and the cycle's inevitable connection to homelessness.

Two-time Grammy-winner Speech Thomas is widely considered one of the godfathers of conscious hip-hop. His band Arrested Development's 1993 debut album "3 Years, 5 Months & 2 Days in the Life of..."  went quadruple platinum and achieved what few thought was possible at the time, establishing an Afrocentric alternative to gangster rap that was commercially viable. 25 years later, Speech continues to tour the world with his band and seek out opportunities to use music to address issues of social and racial justice. In the process of making this film, Speech was so impressed by the talent he uncovered that he resolved to produce an album with the 4 men. Proceeds from the album (available on vinyl and digital formats worldwide) will benefit the artists.

Arriving on DVD on February 7th via MVD Entertainment Group