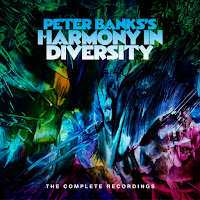 Peter Banks was one of the original members of YES and an accomplished guitarist, but sadly passed away in 2013. This set is being released in his memory, by his Estate, during the 5th anniversary of his passing and the 50th Anniversary of YES.

This is the FIRST EVER mainstream release of the “Harmony in Diversity” recordings.

The set features ALL the recordings of the band and has been overseen and mixed by Andrew Booker and Nick Cottam with the additional approval of Dave “Jick” Speight who appeared on the final disc of the set.

The set also features new artwork, an extensive booklet and the audio has received a 2018 remaster. The albums are also available in their original individual form digitally.


“It was tragic that few realised just what an incredible guitarist Peter was, his approach was off the wall yet so beautifully emotive. A truly expressive musician” – Nick Cottam

“It was surprisingly rewarding going back over old recordings and finding good things everywhere. It was pleasure to rediscover music I had long neglected and forgotten, and turn it into pieces that I now enjoy listening to again and again. I can still hear Peter cackling at his effects unit as yet again he turns single sustained guitar note into one of those old ambulance sirens. I can still see Nick jutting his head backwards and forwards as he cheerfully pounds out his bass riff over and over. Meanwhile, drowned out by the other two, I’m reaching for the volume control on my electronic kit, and realising it won’t go any further. A lot of effort at the time, and a lot of effort recently too, but in the end, effort that was well worth it.” – Andrew Booker