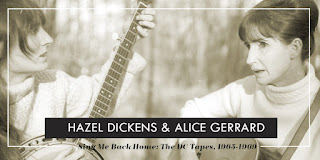 Musical trailblazers Hazel Dickens & Alice Gerrard are revered today as pioneering women in bluegrass, two artists whose musical partnership directly inspired future innovators like Naomi Judd, Emmylou Harris, Tim O’Brien and Hot Rize, and even Bob Dylan. But in Baltimore and Washington, DC in the 1960s, they were just two women with prodigious musical talent and a shared love for the old songs of the Appalachian countryside. Sharing their music at jam sessions, the two discovered a musical kinship that brought them both far from their original roots–Alice from her original home in Seattle and Hazel from her childhood roots in West Virginia. Moving beyond the conventional bluegrass instrumentation and repertoire, Hazel and Alice’s roving curiosity gobbled up songs from all corners of the US, from crusty country ballads to old stringband songs. They fused it all together into a sound that was wholly their own, as innovative as bluegrass had always been, and as raw and authentic as the mountain home the songs first came from. The pure joy that Hazel and Alice found playing together is perfectly captured on a set of newly unearthed recordings, Sing Me Back Home: The DC Tapes, 1965-1969, out September 21 on Free Dirt Records. All but one of the songs have never before been commercially released by the duo. Sourced from Alice's private archive and digitized with help from the Southern Folklife Collection at UNC Chapel Hill, the recordings invite us to witness the creative process of these towering figures—just two voices and a handful of instruments working out arrangements at home. Across 19 tracks, the duo sings the classic country of The Carter Family, The Louvin Brothers, and Jimmie Rodgers; contemporary hits of the 1960s penned by Dolly Parton and Merle Haggard; and barn-burning traditional standards. Sing Me Back Home is a raw, unfiltered listen to Hazel & Alice at the height of their collaborative energy.