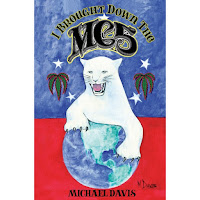 Famed bass player from MC5, Michael Davis, takes us on a rollercoaster ride of triumph and tragedy in his superb new 350-page memoir titled “I Brought Down The MC5”! The book includes rarely seen photos and original artwork by Davis!

“I basically wanted to be the MC5. The attack! They were really on! They were brilliant!” - Lemmy


MC5 had a promising beginning which earned them a January 1969 cover appearance in Rolling Stone and a story written by Eric Ehrmann before their debut album was released. They developed a reputation for energetic live performances, one of which was recorded as their 1969 debut album Kick Out the Jams. In 1972, just three years after their debut record, the band came to an end. MC5 was often cited as one of the most important American hard rock groups of their era. Their three albums are regarded by many as classics, and their song “Kick Out the Jams” is widely covered.

“For me, Michael was the original cool guy... He belongs in the Hall Of Fame, along with his whole group, for their contributions to American music and its politics.” - Iggy Pop


CHAPTERS:
Intro
Sandals And Needles
The Apple Bites Back
Like A Rolling Stone
Everybody Must Get Stoned
I Can Only Give You Everything
Getting Down
The New York Minute
The Promise Is Broken
Atlantic Crossing
Out Of The Frying Pan
Into The Fire
The Bridge To Nowhere
Delirious Alcoholic Megalosaurus
Play With Fire
The Oven
The Mind Shifts
The Road With No Name
My Time After Awhile
Epilogue

To purchase Michael Davis's “I Brought Down The MC5” book: https://cleorecs.com/store/shop/i-brought-down-the-mc5-book/