Peter Asher (Peter & Gordon) and Jeremy Clyde (Chad & Jeremy)
team up for a special show at the Regent Theatre in Arlington on March 15th! 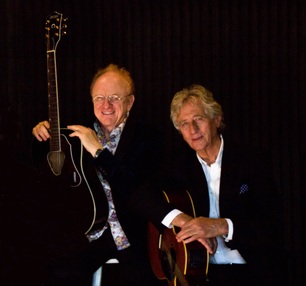 In 1964, no shot was fired, but by mid-year America had surrendered to the irresistible beat heard round the world-- the British Invasion. Now members from two of the architects of that Invasion, Peter & Gordon and Chad & Jeremy, return to Boston as a new duo made up of old friends. It's only fitting that these singers of a certain vintage visit the historic Regent Theatre in Arlington.

Peter & Gordon were the first Invaders to follow the Beatles to the pinnacle of the US charts with their globe dominating smash, "A World Without Love", a Lennon-McCartney gem given to the duo by Paul himself. Before that summer of '64 was complete, Peter & Gordon would follow up with "Nobody I Know" while Chad & Jeremy -- fellow graduates of the swinging London music scene - would join the invasion with two masterful tunes of their own, "Yesterday's Gone" and "Summer Song". Messrs. Asher and Clyde present their great songs, along with pictures and stories of the fabulous Beatles, Stones, Del Shannon, Searchers, James Taylor, Badfinger, John Barry and many more in this multimedia memory fest.

Of course, both remain at the top of their game - Jeremy Clyde fresh from the Phoenix Theatre in London's West End, where he appeared as Denis in Tim Firth's "The Girls", while Asher continues to be heard each week on SiriusXM's Beatles Channel with "From Me To You", the radio show he hosts and produces when he can be pried away from producing work along the lines of 2017's "The Long Awaited Album" by Steve Martin and The Steep Canyon Rangers.  Asher, whose resume includes signing (to Apple Records), producing and managing James Taylor and producing and managing Linda Ronstadt among others, has in recent years produced two albums by Steve Martin and Edie Brickell as well as a compilation album for Elton John.

As their respective British Invasion duos were collectively responsible for 30 Billboard chart hits, expect an evening of songs known and loved. From the Chad & Jeremy catalog, they bring you "Distant Shores", "Willow Weep For Me", "Before and After", and more including of course, "A Summer Song" and "Yesterday's Gone" ... From the Peter & Gordon songbook comes "Woman", "I Go To Pieces", "I Don't Want To See You Again", "Lady Godiva", and "A World Without Love" among others.

Don't miss this special opportunity to hear the stories behind the lives and music of these two legendary duos from the era that wiped clean and drew again the face of popular culture.