The Ed Palermo Big Band Releases The Adventures of Zodd Zundgren, a Dizzying and Ingenious Reinvention of Music by Frank Zappa and Todd Rundgren! 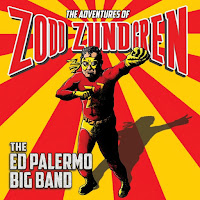 Ed Palermo may have gained an international following with his ingenious orchestral arrangements of Frank Zappa tunes, but he’s hardly a one-trick pony. Earlier in the year, the saxophonist released an uproarious double album The Great Un-American Songbook Volumes 1 & 2, a project celebrating an expansive roster of songs by successive waves of British invaders, from the Beatles, Rolling Stones and Jeff Beck to King Crimson, Traffic, and Jethro Tull.

With his new big band project, released on Cuneiform Records on October 6, 2017, Palermo is back on his home turf, but the landscape feels strange and uncanny. He’s reclaiming the Zappa songbook, filtering Frank through the emotionally charged lens of the polymathic musical wizard Todd Rundgren in a wild and wooly transmogrification, The Adventures of Zodd Zundgren. Working with the same stellar cast of players, Palermo somehow captures the essence of these iconoclastic masters, making Zappa Zappier and Todd more Rundgrenian.

He sees the Zappa and Rundgren as embodying a ying and yang approach to life that played an essential role in helping him navigate the minefields of teenage angst in the 1960s. “For most of my high school days my favorite musicians were Zappa and Todd Rundgren,” Palermo says. “Rundgren had his songs about self-pity, which were exactly what I needed back then. I’d go out with a girl and whatever party I brought her to she’d go and hang out with another dude. Todd understood. At the same time, Zappa had these snarky songs like ‘Broken Hearts are for Assholes.’ It was tough love. You gotta broken heart? Deal with it. Todd Rundgren’s music was there to give you a hug. I wanted to contrast the hard-bitten Zappa followed by a bleeding heart Rundgren ballad.”

Though the title suggests a forced merger, The Adventures of Zodd Zundgren doesn’t mashup the oeuvres of the two masters. Rather, the album mostly alternates between the composers, creating a deliciously dizzying whipsaw as the two diametrical stances sometimes blur or even switch. Zappa’s soaring fanfare “Peaches En Regalia” is more inspirational than smarmy, with a particularly eloquent alto sax solo by Cliff Lyons, while a brisk and forthright version of Rundgren’s “Influenza” showcases the muscular lyricism of violinist Katie Jacoby, one of the orchestra’s essential voices.

Palermo reaches deep into the Rundgren songbook for “Kiddie Boy,” a stinging blues from 1969’s Nazz Nazz, the seminal second release by his underappreciated band Nazz (an album which originally bore the Zappaesque title Fungo Bat). Drawing directly from the maestro’s original horn arrangement, Palermo displays some impressive guitar work on a vehicle for Bruce McDaniel’s blue-eye vocals. Napoleon Murphy Brock delivers a poker-faced rendition of Zappa’s surreal “Montana,” the tune that turned a generation on to the lucrative potential of floss farming, and McDaniel and Brock join forces on Rundgren’s deliriously silly “Emperor of the Highway,” an homage to Gilbert and Sullivan.

The contrasting sensibilities of the Zundgrens comes into sharp focus in the center of the album. While Palermo has recorded Zappa’s “Echidna’s Arf (Of You)” this time he replaces the horns with McDaniel’s intricately layered vocals via the miracle of multi-tracking. From Zappa’s playfully odd metered work out the big band saunters into Rundgren’s greatest ballad “Hello It's Me,” an arrangement for McDaniel’s most impassioned crooning based on the original version from 1968 album Nazz (not the hit from his solo Something/Anything? album).

Tenor saxophonist Bill Straub swaggers through Rundgren’s “Wailing Wall,” which is sandwiched between two slices of Zappa at his snarky best, “Big Swifty Coda” and “Florentine Pogen,” another superb feature for Brock. Palermo spotlights a dark and wondrous Zappa obscurity with “Janet's Big Dance Number,” a brief piece recovered from 200 Motels featuring Ben Kono’s noir tenor solo. From that unified hedgehogian arrangement Palermo unleashes the multifarious fox on Rundgren’s “Broke Down and Busted,” a portmanteau arrangement that touches on Rundgren’s “Boat on the Charles,” the Ramsey Lewis hit “The ‘In’ Crowd,” Zappa’s “Brown Shoes Don’t Make It,” and even traces of Steely Dan’s “Pretzel Logic.” It’s a tour de force that feels like stream of consciousness journey, though the id truly emerged on the closing hidden track. In what has become a Palermo tradition, he includes yet another version of an enduring lament about the difficulties of relationships, arranged this time in Nazzian style by McDaniel.

The seamless ease with which Palermo and his crack crew navigate between the Zappa and Rundgren shouldn’t come as a surprise. Over the years Zappa’s music has proven supremely pliable in Palermo’s capable hands, as evidenced further by a recent concert at Iridium that paired his songs with standards indelibly linked to Ol’ Blue Eyes (is there an album The Adventures of Zinatra in the future?). Everything he brings into the big band is a labor of love.

“Todd Rundgren holds a very special place in my heart,” Palermo says. “I realized I was in love with my girlfriend (now wife) listening to his album Something/Anything? It was about 2 years ago doing our regular hit at The Falcon that I decided to have Zodd Zundgren night. A lot of people who like the music of Zappa also like Rundgren and Steely Dan, but there are enough Steely Dan cover bands out there.”

Born in Ocean City, New Jersey on June 14, 1954, Palermo grew up in the cultural orbit of Philadelphia, which was about an hour drive away. He started playing clarinet in elementary school, and soon turned to the alto saxophone. He also took up the guitar, and credits his teenage obsession with Zappa to opening his ears to post-bop harmonies and improvisation.

Palermo caught the jazz bug while attending DePaul University, and took to the alto sax with renewed diligence inspired by Phil Woods, Cannonball Adderley, and Edgar Winter (the subject of an upcoming EPBB project). Before he graduated he was leading his own band and making a good living as a studio player recording commercial jingles. But like so many jazz musicians he answered New York’s siren call, moving to Manhattan in 1977. After a year of playing jam sessions and scuffling Palermo landed a coveted gig with Tito Puente, a four-year stint that immersed him in Afro-Cuban music.

An encounter with trumpeter Woody Shaw’s septet at the Village Vanguard in the late 1970s stoked his interest in writing and arranging for larger ensembles, and by the end of the decade he had launched a nine-piece rehearsal band with five horns. Between Don Sebesky’s well-regarded book The Contemporary Arranger and advice from Dave Lalama and Tim Ouimette, “I got a lot of my questions answered and I’ll love them forever,” Palermo says. “Then the real education was trial and error. I lived in a little apartment with no TV or furniture. All I had was a card table, and once a week I’d rehearse my nonet, then listen to the cassette of the rehearsal and make all the changes.”

Palermo made his recording debut in 1982, an impressive session featuring heavyweights such as David Sanborn, Edgar Winter and Randy Brecker. As a consummate studio cat and sideman, he toured and recorded with an array of stars, including Aretha Franklin, Eddie Palmieri, Celia Cruz, Lena Horne, Tony Bennett, Mel Tormé, Lou Rawls, Melba Moore, The Spinners, and many others. As an arranger, he’s written charts for the Tonight Show Band, Maurice Hines, Eddy Fischer, and Melissa Walker. Employed frequently by bass star Christian McBride for a disparate array of projects, Palermo has written arrangements for a James Brown concert at the Hollywood Bowl, a Frank Sinatra tribute featuring Kurt Elling, Seth McFarland, and John Pizzarelli, and a 20-minute medley of Wayne Shorter tunes for the New Jersey Ballet.

Palermo had been leading his big band for more than a decade before the Zappa concept started coming together. Inspired by electric guitar master Mike Keneally, who performed with Zappa on some of his final concerts before his death in 1993, Palermo decided to arrange a program of 12 Zappa tunes. When the time came to debut the material at one of the band’s regular gigs at the Bitter End in early 1994, a sold-out crowd greeted the band.

He earned international attention with the ensemble’s 1997 debut The Ed Palermo Big Band Plays Frank Zappa on Astor Place Records, which received a highly-prized 4-star review from DownBeat. With Palermo’s brilliant arrangements and soloists such as Bob Mintzer, Chris Potter, Dave Samuels, Mike Stern, and Mike Keneally, the album made an undisputable case for the Zappa jazz concept. In 2006 he released another collection of Zappa arranged for his jazz big band, called Take Your Clothes Off When You Dance, on Cuneiform, thus beginning an ongoing collaboration with that label. While Palermo has written more than 300 Zappa charts, he’s cast an increasingly wide net for material. Recent releases like 2014’s Oh No! Not Jazz!!, 2016’s One Child Left Behind and 2017’s The Great Un-American Songbook Volumes 1 & 2 - all on Cuneiform and all recipients of DownBeat’s coveted 4-star ratings - featured a bountiful selection of his original compositions and material by composers not named Frank Zappa.

Nothing demonstrates the ensemble’s ongoing vitality better than the stellar cast of players, with longtime collaborators such as violinist Katie Jacoby, baritone saxophonist Barbara Cifelli, drummer Ray Marchica, and keyboardist Ted Kooshian. Many of these top-shelf musicians have been in the band for more than a decade, and they bring wide-ranging experience, expert musicianship and emotional intensity to Palermo’s music.

The band’s following continues to expand with its monthly residency at Iridium and bi-monthly gigs at The Falcon. In addition, performances (some headlining) at jazz festivals across the USA are winning new fans of all ages for the band. Palermo’s profile in the jazz press is also rising fast, with articles and feature stories appearing this past year in such publications as Jazz Times and Jazziz. Regarding recordings, albums by The Ed Palermo Big Band have been critically acclaimed and also embraced by the general public-jazz and rock fans alike. Palermo has already recorded dozens of new tracks for The Great Un-American Songbook Volumes 3 & 4, and is hoping Zodd Zundgren helps introduce Rundgren’s ingenious, heartfelt music to a new generation.


The Adventures of Zodd Zundgren