Members of Blondie, MC5, Replacements, and The Heartbreakers perform L.A.M.F.

L.A.M.F. is the album recorded by Johnny Thunders & the Heartbreakers in punk-era London, after they accompanied the Sex Pistols, Damned & Clash on the aborted 'Anarchy Tour'. Being ex-members of the New York Dolls they were lauded by the young punks, and went on to record the high-octane rock'n'roll album, in retrospect labelled as a classic.

This live DVD, colored vinyl LP and CD follows on from the remastered 40th anniversary edition of L.A.M.F. and the reissue of an extended Definitive Edition 4CD box set (and triple-vinyl) of the albums many mixes and demos.

The release coincides with Walter Lure taking his L.A.M.F. show on out the road again - this time with the Sex Pistols' Glen Matlock on bass, Social Distortion's Mike Ness on guitar & vocals, and again Blondie's Clem Burke on drums. They play six dates starting at the end of November 2017 covering US east and west coasts, with gigs in Los Angeles, San Diego, Brooklyn and New York. 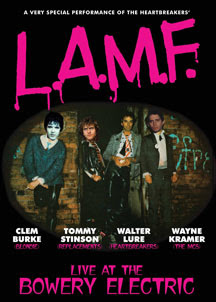 Coming to DVD and CD on December 8th