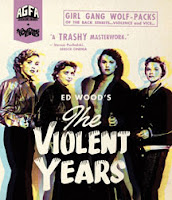 
Alamo Drafthouse's American Genre Film Archive, the largest non-profit genre film archive in the world, and Something Weird are excited to announce an November 21st release of THE VIOLENT YEARS on Blu-ray. After a successful Kickstarter campaign in 2015, AGFA purchased a 4K film scanner to create new digital transfers of titles from the Something Weird library. THE VIOLENT YEARS is the third release of dozens in this partnership, following THE ZODIAC KILLER and BAT PUSSY.

"Ed Wood's influence is woven into our DNA," said AGFA director Joe Ziemba. "We're honored to help the world reassess his importance as a ground-breaking queer filmmaker through our release of THE VIOLENT YEARS with Something Weird. Wherever he is, we hope Ed is smiling."