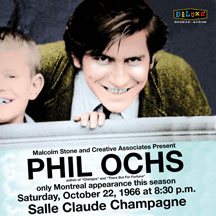 "It's not enough to know the world is absurd and restrict yourself to pointing out the fact. Still I am forced to go on because I don't want the world to be left in the hands of the Hitlers, This one thing I feel is a driving force: that I get repelled by certain things - or they strike me as funny, or weird or strange, or ridiculous - and my response comes out in the form of a song." - Phil Ochs

"Repelled. Funny. Weird. Strange. Ridiculous. Hitlers. These words resonate 50 years later, especially under the current political circumstance, a sad indication of how little has changed. Few songwriters mirror the moment they lived in as definitively as Phil Ochs. He was considered a folksinger and yet he didn't rewrite Child Ballads or resurrect Delta blues. For most of his career he accompanied himself with a sole acoustic guitar, but by 1966, his lyrics became more complex, more artful and his melodies and arrangements more baroque. He'd have as much in common with Brecht and Weill as he would with Pete Seeger.

The Montreal gig was smack dab between his final Elektra album and his first release for A&M Records in November '67. On the former he's still the lone troubadour, armed only with a guitar that kills fascists (to paraphrase Woody Guthrie), while on the latter he utilizes ornate orchestration and piano accompaniment ranging from classical to ragtime. In many of the renditions heard on this live set, one can hear Ochs toying with the arrangements, adjusting the tempo mid-song and applying dissonance for effect. In some instances, his ideas outrun his technical capabilities.

And his voice, an instrument that could register as thin but here is full-bodied and blessed with one of the best vibratos in show biz. Younger brother Michael Ochs was present in Laurel Canyon one day when Neil Young told Phil that 'The way you stretch notes is one of my biggest influences.'"