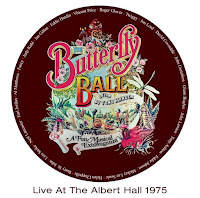 “The Butterfly Ball and the Grasshopper's Feast” is a concept album and subsequent live rock opera appearing in 1974 and 1975 respectively, based on the children's poem of a similar title. The work was originally conceived as a solo vehicle for Jon Lord to be produced by Roger Glover who had recently left Deep Purple. However, Lord proved too busy with Deep Purple and Glover took up the reins on his own. Using his connections, Glover recruited a large cast of noted rock musicians to perform on it, with a different vocalist for each character, including David Coverdale and Glenn Hughes.

On 16 October 1975, a one-off performance at the Royal Albert Hall took place. Again it had a star-studded cast of rock musicians, most notably Ian Gillan who was drafted in at the last minute and received a standing ovation on his entrance. He replaced an unavailable Ronnie James Dio who had commitments with Ritchie Blackmore's Rainbow (although Dio did eventually get to perform the song at the Royal Albert Hall in 1999 as the guest of Deep Purple). Gillan had not performed since leaving Deep Purple in 1973. Also notable was the appearance of Twiggy as singer and actress and Vincent Price as narrator. Apart from most of the musicians involved in the studio recording, the concert also featured Jon Lord. The live concert was filmed and released in 1976 produced and directed by Tony Klinger.

There will only be 250 Boxes manufactured.

PledgeMusic is the leading global direct-to-fan platform dedicated to empowering artists, labels and brands to build communities, fund and pre-sell recordings, and provide unique experiences and exclusives throughout the entire music production and promotion lifecycle. PledgeMusic was named as one of The World’s Top 10 Most Innovative Companies of 2015 in Music for “Helping artists and fans get what they want”. – Fast Company.