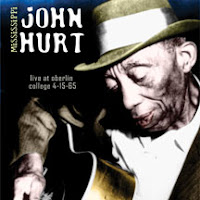 John Smith Hurt, commonly known as Mississippi John Hurt was born in the early 1890's and is one of those legendary blues singers of the same generation at Son House, Big Bill Broonzy, Blind Lemon Jefferson and Charlie Patton. He started playing guitar at age 9 and worked on and off as a sharecropper, recording for Okeh and Vanguard Records but the resurgence of his career came when he was invited to play at the 1963 Newport Folk Festival. This excellent concert recording from a performance at Oberlin College in 1965, less than 2 years before his death, came at a time when Mississippi John Hurt was coming back into the blues spotlight and being discovered by a new generation of fans. Hurt's rich, gentle voice and relaxed, flowing guitar lines could soothe the stormiest Monday. Among the hymns and traditional songs heard here are "The Angel's Laid Him Away" and "Here I Am, Oh Lord, Send Me". Complementing those are Hurt folk/blues staples, notably "Salty Dog" "Coffee Blues," and "Monday Morning Blues." While not showcasing the raw emotion of his earlier work, the blues patriarch's warmth and intimacy shine through here, especially during his exchanges with his audience. This performance offered Hurt's fine balance of child-like and mature, his voice mellow and his skill in the technically difficult art of finger-picking never diminished.