The Box Tops Celebrate 50th Anniversary as Part of Happy Together Tour 2017! 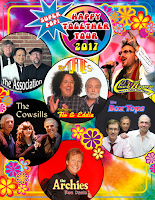 Memphis blue eyed soul legend THE BOX TOPS celebrate their 50th anniversary and the release of their mega hit THE LETTER as a featured act on the HAPPY TOGETHER TOUR 2017. Considered the premier 60's package tour, HAPPY TOGETHER will play in almost 50 US cities between Memorial Day and Labor Day.

2016 was truly a remarkable year for the BOX TOPS. After a six year hiatus, original founding members BILL CUNNINGHAM AND GARY TALLEY joined up with their former manager (and musician) RICK LEVY for exploratory rehearsals in Nashville. Buoyed by keys, drums, and horn section, THE BOX TOPS took to the road in January 2016, and played concerts up and down the East Coast and the Midwest. They  were the featured act at Las Vegas' Cannery Casino Summer Kickoff Concert, which had its biggest attendance ever.

Their authentic sound, contemporary look, and raves from audiences and promoters alike brought THE BOX TOPS to the attention of the producers of the HAPPY TOGETHER TOUR. Offered a featured and co-billing spot, they accepted. As manager Levy stated, “Strategically, there is no better opportunity to be seen by so many fans, top promoters, and buyers in such a concentrated time. The HAPPY TOGETHER TOUR 2017 will be a fantastic opportunity for fans to sample THE BOX TOPS all across the country.”


THE BOX TOPS continue to perform select shows outside of the summer tour and field international inquiries as well. Join the BOX TOPS as they celebrate their 50th anniversary all during 2017.