This summer Metallica's WorldWired tour hits stadiums across North America. The band has invited along special guests Avenged Sevenfold and openers Volbeat or Gojira to join them through out the summer. However, as some fans have noticed, there are a handful of cities (five to be exact!) where only one band from the bill is able to join. Since Metallica have had so much fun checking out local bands that fans voted for to open the shows in other parts of the world (Central/South America, Copenhagen and Mexico City), it only seems natural to invite fans to once again voice their opinion and help choose a band. This time around, the group receiving the most fan votes will hit the stage first on their own five-city tour!

Metallica fans will have the opportunity to vote in two phases. For the first phase, visit the sites of the radio partners below in each market.

All the votes will be tabulated by the stations and two finalists from each contest will go head to head for votes in phase two on Metallica.com starting next week on April 14th.  Ten days later the band with the most votes will be announced and can start packing their bags to head to their first gig in Foxborough at Gillette Stadium courtesy of Metallica!

Vote locally now and stay tuned to see who will open the shows in Foxborough, St. Louis, San Antonio, Dallas and Chicago on the WorldWired tour. 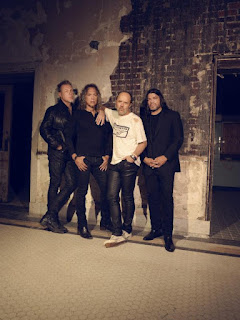 ABOUT METALLICA
Metallica formed in 1981 by drummer Lars Ulrich and guitarist and vocalist James Hetfield and has become one of the most influential and commercially successful rock bands in history, having sold 110 million albums worldwide while playing to millions of fans on literally all seven continents. They have scored several multi-platinum albums, including 1991's Metallica (commonly referred to as The Black Album), with sales of nearly 17 million copies in the United States alone, making it the best-selling album in the history of Soundscan. Metallica has also garnered numerous awards and accolades, including nine Grammy Awards, two American Music Awards, and multiple MTV Video Music Awards, and were inducted into the Rock and Roll Hall of Fame and Museum in 2009. In December 2013, Metallica made history when they performed a rare concert in Antarctica, becoming the first act to ever play all seven continents all within a year, and earning themselves a spot in the Guinness Book of World Records. Metallica's latest album Hardwired...To Self Destruct was released on November 18, 2016 on Metallica's own Blackened Recordings record label and debuted at No. 1 around the world, selling over 800,000 copies worldwide in its first week.