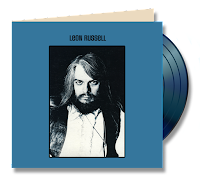 Marhall Blonstein's Audio Fidelity is releasing Leon Russell's self-titled debut album on 180g Blue Translucent Vinyl with gatefold sleeve! One of the most startling original debut albums ever, “Leon Russell” was the culmination of many years apprenticeship behind-the-scenes of the music business, where he was a well-known and long-respected figure. As one of the most accomplished musicians to emerge from the '60s music scene, Leon Russell proved equally accomplished as a singer, guitarist, keyboard player, composer and producer.

Combing those skill after many years as a touring musician and in Hollywood recording studios, Russell emerged in the '70s as one of rock's true renaissance men.

Among the wonderful songs included are “Delta Lady,” his standard-to-be, “A Song For You,” and “Hummingbird.”

Russell was inducted into both the Rock & Roll Hall of Fame and Songwriters Hall of Fame.

SIDE: 1
1-A SONG FOR YOU
2-DIXIE LULLABY
3-I PUT A SPELL ON YOU
4-SHOOT OUT ON THE PLANTATION
5-HUMMINGBIRD

SIDE: 2
1-DELTA LADY
2-PRINCE OF PEACE
3-GIVE PEACE A CHANCE
4-HURTSOME BODY
5-PISCES APPLE LADY
6-ROLL AWAY THE STONE