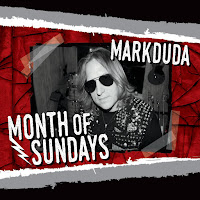 Mark Duda is an artist and musician from New York City’s East Village who sings, plays guitar, and writes great original rock and punk songs. Over his storied career, he has worked with a who’s who of New York’s rock and roll royalty, and he has helped carry the torch for bands and artists such as the New York Dolls, Dead Boys, and Johnny Thunders into the 21st Century.


Month of Sundays showcases a certain departure from the hard, classic rock that Mark Duda’s other bands (The Handful, Mad City Rockers) are known for. Instead, this is a melodic and tuneful blend of storytelling and traditional rock and punk that is full of New York City swagger. The album is as much a tribute to the music and club scenes of ‘70s and ‘80s Lower Manhattan as it is a representation of some of the very current sounds and energy that can be found in the “Big Apple.”


Mark Duda is in top form on Month of Sundays, performing songs that seamlessly blend traditional rock with elements of punk and doo wop. “This is the album I always wanted to make,” Mark says, “with the songs my bands couldn’t or wouldn’t do, played by musicians who truly understood where the material was coming from. This new album is really a love letter to the East Village. A message in a bottle, washed up on the banks of the East River.”


Before recording Month of Sundays, Mark Duda gained wide recognition as the frontman for New York hard rockers, The Handful. The Handful have released four full-length albums since 2004, including Sons of Downtown in 2015. This album marked the first collaboration between Mark and Cheetah Chrome, where Cheetah played on three tracks and mixed the album. Other releases with The Handful include Second Hand Smoke, Palmistry, and Wooden Indian on which Mark wrote, sang, and played guitar.


Sons of Downtown features Mark in a duet with Cherie Currie of Runaways fame, and guitar work by rock icon Pat Travers. Mark is also the lead vocalist for Rome, Italy-based band Mad City Rockers, who released the album Black Celebration in 2009.


Mark continues to write and record for himself and with other groups. Plans are in the works for Tri-State record release parties in support of the Month of Sundays release, while also continuing to write and record The Handful’s follow-up to Sons of Downtown.


Month of Sundays includes brand new songs that are sure to make a fan of anyone who loves good old rock and punk, and who are looking for something new to add to their rotation.
markdudamusic.com