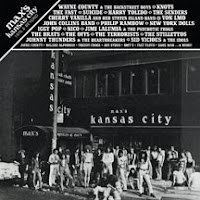 Max's Kansas City is the legendary New York City nightclub that became the focal point for the city's hip artistic community from the late 60's until the early 80's. In its initial period, it was famously often populated by Andy Warhol's Factory crowd, and played host to new artists such as the Velvet Underground, New York Dolls, the Stooges, Bruce Springsteen and countless others. It became a base for jet-setters, glam rockers and celebs, until the scene faded and it shut its doors at the end of 1974.

Reopened in 1975 under new management, Peter Crowley was hired as music director. The new young bands he booked helped spawn, in tandem with CBGBs, the New York City punk scene. In 1976 Peter compiled a studio album of acts associated with the club, Max's Kansas City 1976, to help promote the club. It featured the first released recordings of Suicide, The Fast and Warhol-era veteran Wayne County, whose title-track gave a roll-call of many of the famous acts who'd regularly performed there.

Now the original album is reissued as Max's Kansas City 1976 & Beyond, greatly extended to 40 tracks on a double-CD and a selection of 25 tracks on a double-LP. As well as the aforementioned Suicide, Fast and Wayne County, the new extended album features the New York Dolls, the Stillettos, the Offs, the Senders, Philip Rambow, VON LMO, Iggy Pop, Knots, Roland Alphonso, Cherry Vanilla, Nico, Joy Ryder, Johnny Thunders & the Heartbreakers and Sid Vicious amongst many others. It includes many previously unreleased tracks and rarities. Compiled by Peter Crowley, who also contributes notes detailing the history of the album. Writer, musician and Max's scenester Jimi LaLumia provides historical overview sleeve-notes along with biographies of the artists in a 20-page booklet.

Jimi LaLumia writes:
"Max's Kansas City 1976 as an expanded edition two record vinyl and double CD collection, celebrates the historic first compilation of recordings by bands that were making big noise in New York City, and, thanks to a hyper active UK music press, around the world in a pre internet, truly underground manner. Melody Maker, a British music weekly, was especially keen on the post Velvet Underground / New York Dolls / Alice Cooper / Iggy & The Stooges scene that was inspiring the most unusual creatures to want to be in bands.

The Max's album was my go to album for months; finally, tracks from Wayne County, Cherry Vanilla, and The Fast... Not to mention Suicide and Pere Ubu. I got introduced to Harry Toledo and the John Collins band: I won't go into all the details here, because I wrote extensive detailed liner notes for the Jungle Records UK re issue coming in May, with additional notes from Peter Crowley, which are worth the price of the album, not to mention all the added extra tracks, so I'll simply say that if you think you know everything about the late 70's downtown scene, some additional reading material and bonus tracks are headed your way."