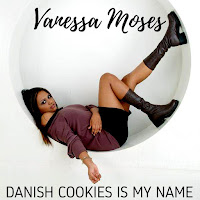 A true musical citizen of the world, award winning Malaysian singer-songwriter Vanessa Moses has performed in Korea, Hong Kong, China and throughout Asia; became the first Asian songwriter to break into the country music scene in Tamworth, Australia; won second place for songwriting in the Tasmania & New Zealand Songwriting Contest; and has received airplay throughout Australia and Europe. Now, taking her career to a sweet and empowering new level, she follows her successful international debut My Secret Page with the cleverly titled EP Danish Cookies is My Name, her highly anticipated debut on the independent label Senate Records.

Produced by label owner and veteran blues/rocker Joey Stuckey, the six track set builds upon the stylish pop/jazz vibe of Vanessa’s first release with an infectious hybrid style she calls “an acoustic pop/blues/country style with a jazzy vocal twist.” Her signature song, the spirited, high energy pop-Latin driven title track “Danish Cookies Is My Name,” originally appeared on the popular compilation Joey Stuckey Presents: Ladies of the South. Stuckey signed her after hearing tracks from My Secret Page online, and chose to include “Danish Cookies…” on the compilation to pave the way for the release of her new EP. He remixed her original version, added new instruments and gave it a sizzling Latin vibe with musicians he works regularly with in his hometown of Macon, Georgia.


“I wrote ‘Danish Cookies Is My Name’ a few years ago when I was in India and recording the final bit of My Secret Page,” Vanessa says. “I remember feeling very exhausted from six months of hard work on the album, traveling heaps and doing band trainings. That very day I received a wonderful gift, a tin of Danish cookies. I felt as good as those cookies. They made me feel inspired. I wanted to express how strong, sexy and motivated I felt as a woman working towards her dreams. My guitarist/partner (and now husband) created the riff, and the lyrics and music came to me very quickly, and my drummer Joeboy created a fresh beat for it, while I played piano, with bass and keys by my friend Louie Martin. It was like a party in the studio. The song gained a lot of interest from labels and fans, and I was thrilled. Then when Joey mixed it with his amazing musicians from Georgia and added that Latin vibe, the party just got bigger and more exciting.”

Other key tracks on the EP include “Hey You,” a Carrie Underwood inspired pop country gem that expresses a woman’s weakness that turns into strength for a man she is in love with; the beautiful unabashed love song “Under One Sky,” which revels in the bursting joy of new lovers being connected no matter their physical  distance; the country ballad “Would You Have Me Back,” and the pop/blues track “Emotion For You,” which was featured on the All Star Independent Album nationwide in Australia and Europe and received a great deal of airplay. Vanessa also does a playful pop version of Stuckey’s song “Bad Dreams.”

In the years since the release of My Secret Page, Vanessa’s flexible songwriting skills have earned her numerous unique career accolades. Her song “Dance Cowboy Dance,” a co-write with renowned country singer Sandie Dodd of the band Ruckus, was a finalist in Tamworth’s Best New Songwriter Awards. The song also earned 3rd Place in the Victorian Country Music Professional Division and Contemporary Country Award finalist at the Victorian and National Music Awards Whittlesea; finalist for Best National Victorian Group; and 2nd place for songwriting and recorded section in the Tasmania & New Zealand Songwriting Contest. Vanessa’s later track “I’m a Bleeding Love Song,” co-produced with rising Euro talent DJ Li, was released by indie label Li Empire and became a sensation at clubs and venues throughout Eastern Europe. This success earned Vanessa an array of interested collaborators and producers.

“I really enjoy songwriting, and I feel like I will be doing that for the next 30-40 years or even more,” she says. “The most rewarding thing in my career is the response of my fans throughout different regions that connect to the lyrics I’m writing and their expression through emails and messages really keep me going in this path of my music career. The breaks I’ve had in these couple of years from performing has really allowed me to grow as a songwriter and recording artist. With all my heart, I’m looking forward to sharing my EP with the world in 2017. It’s like I’ve been nurturing my babies and now they’re ready for the world!”