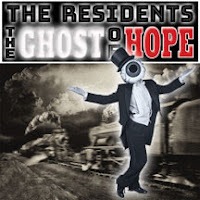 Following their long tradition of projects based on narrative themes, The Residents are pleased to announce the release of The Ghost of Hope, a historically accurate album based on train wrecks from the late 19th and early 20th Centuries.

After discovering a series of vintage news articles highlighting the dangers of train travel in the late 19th and early 20th centuries and inspired by the era's graceful language, the group contrast that eloquence against the sheer horror of these devastating events. In their own unique style, the band has constructed a highly original series of tone poems quite unlike the music of anyone else - except, of course, The Residents. The album features guest collaborator Eric Drew Feldman - who has worked with everybody cool, so he's already in your record collection.

If there's a primary metaphor within this collection it is certainly found in that humble word 'hope.' When powerful men of the world build political campaigns around this simple four-letter word and fail, one wonders what life might become without it. Regardless, whether it be historical and literal, symbolic and metaphorical or simply nonsense, The Residents remain mum.

"My heart is warm with the friends I make and better friends, I'll not be knowing,
Yet there isn't a train I wouldn't take, no matter where it's going."
~ Edna St Vincent Millay ~ 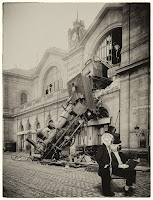 While the great poet's romantic relationship with train travel was undoubtedly heartfelt, she was definitely not traveling by rail as the 19th century neared its end.  The dangers posed by increasingly fast trains, coupled with heavier and heavier cargo loads, moving across an aging rail system, made derailment a common occurrence.

In addition, the primitive communications and safety mechanism of the era often resulted in either head-on collisions or, conversely, "telescoping," which occurred when a stationary or slow-moving train was hit from the rear by another train on the same tracks.  When this happened, especially in winter when the cars were heated by coal-burning stoves and illuminated by kerosene lamps, the wooden passenger cars were quickly engulfed in flames, resulting in a quick and unpleasant death for those surviving the initial impact.  In retrospect, a simple fact was obvious: this revolutionary technology was progressing faster than society could regulate or control it.

Utilizing various techniques, including music, sound effects and text from actual newspaper accounts from the era, The Ghost of Hope purports to recreate several of these horrific incidents.  While the dangers described in these factual events are now largely confined to the past, humanity perseveres, valiantly thundering ahead into the uncharted realms of digital technology, genetic engineering, artificial intelligence and the attempt to spread our seed throughout the cosmos.  Meanwhile, have we learned from the past or are we doomed to repeat our mistakes on an ever grander scale? 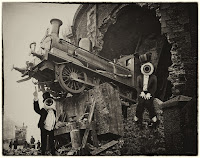 Tracklist:
Horrors Of The Night
The Crash At Crush
Death Harvest
Shroud Of Flames
The Great Circus Train Wreck of 1918
Train vs Elephant
Killed At A Crossing

THE RESIDENTS
Alternately seen as a rock band, an arts collective and a spirit,The Residents have been regarded as icons in the world of experimental music for over forty years. In addition to their groundbreaking work in the areas of trance, world fusion, electronica, punk, industrial and lounge music, the group has also been credited with being among the originators of performance art and music video. Their early videos are in the permanent collection of the Museum of Modern Art and their Freak Show CD-Rom was featured in MOMA's "Looking at Music 3.0" exhibition. Their four decade long career has also taken them into the world of film and television music, having scored numerous films and TV series as well as several projects for MTV. In addition, the group is also thriving in the world of digital media having released ten DVDs, and two internet series.

Recently, performing as Randy, Chuck & Bob, the World's Greatest Residents' Cover Band, the group celebrated its 40th anniversary with a trilogy of tours: The Talking Light, Wonder of Weird and Shadowland. No longer content to merely impersonate a band, The Residents unexpectedly morphed into a power trio, gleefully plundering their vast catalog of music to the delight to their fans. Not content to rest upon their justly lauded laurels, the group is currently reforming as The Real Residents, a four piece combo that will celebrate its debut at the prestigious Blue Note jazz club in Tokyo, performing six shows from March 21-23, 2017.


The Ghost Of Hope