This Oceanic Feeling Announces the Release of the Second Digital Single, I Play Debussy, From the Acclaimed Debut Album Universal Mind!

The members of prog trio This Oceanic Feeling continue to promote Universal Mind, their debut album which has been acclaimed by fans and critics alike. The band’s song “Put Down The Gun” was nominated for the Anthems Awards at the Prog Awards 2016 and there has been an outspoken demand from fans to see a follow up. 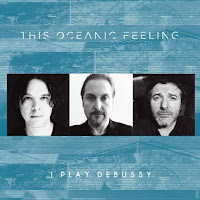 The band members are Chris Braide (lead vocals, guitar and keyboards), Ash Soan (drums) and Lee Pomeroy (bass) who fit in work on this trio project around their other work such as Chris’ production of "A" list artists (eg Sia, Britney Spears, Christijne Aguilera), Ash’s top level session work and Lee’s commitments with Take That, Jeff Lynne's ELO, Steve Hackett and ARW.