"A hybrid of The Three Stooges comedy and the lunacy of The Island of Dr. Moreau."
RogerEbert.com

"The roles are scrumptious and the humor, perfection."
- The Examiner
Drafthouse Films and MVD Entertainment have announced the October 25th release of Oscar®-winning director, Anders Thomas Jensen's "brilliantly imaginative creation" (Filmmaker Magazine) MEN & CHICKEN, in which "Mads Mikkelsen shows why he's one of the greatest character actors around" (Paste Magazine) on Blu-ray/DVD combo pack. 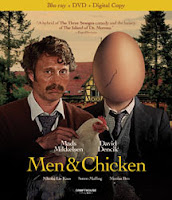 A darkly hilarious slapstick comedy starring Mikkelsen ("Hannibal," Star Wars Anthology: Rogue One) follows a pair of socially-challenged siblings who discover they are adopted half-brothers in their late father's videotaped will. Their journey in search of their true father takes them to the small, insular Danish island of Ork, where they stumble upon three additional half-brothers-each also sporting hereditary harelips and lunatic tendencies-living in a dilapidated mansion overrun by barn animals. Initially unwelcome by their newfound kin, the two visitors stubbornly wear them down until they're reluctantly invited to stay. As the misfit bunch get to know each other, they unwittingly uncover a deep family secret that ultimately binds them together.

In addition to showcasing a nearly unrecognizable and gleefully entertaining side of Mikkelsen that American audiences have likely never before seen, the "hilarious" and "willfully bizarre" (Paste Magazine) comedy by acclaimed director Jensen also stars David Dencik (The Girl With The Dragon Tattoo), Nikolaj Lie Kaas (the Department Q trilogy), Søren Malling (A Hijacking) and Nicolas Bro (Nymphomaniac).

Men & Chicken made waves on the international festival circuit, screening at prestigious festivals such as Sitges, Neuchâtel, BFI London, TIFF and winning the award for Best Comedy Feature at Fantastic Fest, the largest international genre film festival in the US.

Special features include a lengthy booklet featuring gorgeous behind-the-scenes photos and concept art from the film's production as well as a brief essay from Jensen, plus trailers for Drafthouse Films releases and a free HD digital copy of the film.