Beginning in the latter half of 2014, music filmmaker Robert Mugge and his partner Diana Zelman worked with executives Roger LaMay and Bruce Warren of Philadelphia public radio station WXPN and their "World Cafe" host and producer David Dye to document and assist WXPN's exploration of the Creole culture of Southwest Louisiana through its 16-month Zydeco Crossroads project.
The film portion of the project documented concerts by zydeco artists C.J. Chenier and Rosie Ledet in the Philadelphia area and followed XPN staff to Lafayette, Louisiana where concerts were staged featuring additional top zydeco artists Buckwheat Zydeco, Nathan Williams, Chubby Carrier, Rockin' Dopsie, Jr., Major Handy, Creole United, Soul Creole, Lil' Nate Williams, Chris Ardoin, and Corey Arceneaux, along with collaborating Mississippi blues artist Vasti Jackson. Also documented were David Dye's interviews with most of the key performing artists and with zydeco club owner Sid Williams, zydeco historian Michael Tisserand, and zydeco deejay Herman Fuselier of Lafayette public radio station KRVS. These interviews examine the history of music created by Southwest Louisiana Creoles, who are generally defined as people of mixed African, French, Spanish, and Native American descent, but especially African and French. Also discussed are the musical families who, generation after generation, play a dominant role in preserving and updating Creole musical traditions; the differences between earlier fiddle-and-accordion-driven 'French' or 'La La' music and later accordion-and-rubboard-driven zydeco; and the influence of Mississippi blues on both traditional Creole music and contemporary zydeco. The project has resulted in an 87-minute film titled Zydeco Crossroads: A Tale Of Two Cities, which also serves as an update of Mugge's 1994 film The Kingdom Of Zydeco. The film's dialogue is English, while the song lyrics are a mix of English and French patois with English summaries provided where necessary.  Zydeco Crossroads recently won the Clarksdale Film Festival's 2016 Best Blues & Roots Film Award, and the Clarksdale Press Register' Coop Cooper called the film "a fascinating documentary that not only captures the spirit of zydeco music and its sub-genres, but connects them to blues in a way that proves they were born of the same magic."
The Kingdom Of Zydeco and Rhythm 'N' Bayous: A Road Map To Louisiana Music are two of Mugge's classic Louisiana music films that have never been on home video... Until now.  "I see Zydeco Crossroads as a sequel to The Kingdom of Zydeco," said Mugge.  "In fact, I have followed some of the same musicians and Creole families from The Kingdom of Zydeco, through Rhythm 'N' Bayous, and finally to Zydeco Crossroads.  So, it is a thrill for me that MVD Visual is making all three of these films available simultaneously." 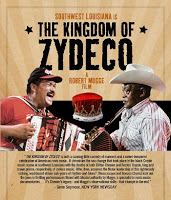 The Kingdom Of Zydeco (1994) looks at the black Creole music scene of Southwest Louisiana and at attempts, in the mid 1990s, to name a new "king of zydeco." The music's original self-proclaimed "king" was the great Clifton Chenier who did more than anyone to develop zydeco's musical form and to promote it around the world. After Chenier's death, his good friend and former "crown prince" of zydeco Rockin' Dopsie was crowned king by the mayor of Lafayette, Louisiana under somewhat controversial circumstances. Then, with Dopsie's death, a new struggle ensued to crown either veteran accordion player Boozoo Chavis (another of zydeco's founding fathers) or the younger Beau Jocque (at the time, Southwest Louisiana's most popular musical artist). The core of the film is a joint concert appearance by Boozoo Chavis and Beau Jocque, which was billed as the event that would determine zydeco's future king, along with efforts by the Louisiana Hall of Fame to crown Boozoo Chavis in accordance with the reputed final wishes of Rockin' Dopsie. Also shown performing in the film are respected bandleader John Delafose and the talented younger artist Nathan Williams of Nathan and the Zydeco Cha Chas. But the film is as much about storytelling as it is about performance, and the tall tales come not only from musicians but also from competing nightclub owners Kerman Richard and Sid Williams (older brother of Nathan), from zydeco deejay Lester Thibeaux, from zydeco record store owner Irene Hebert (sister of Lester), from Zydeco Association heads Wilbert Guillory and Paul Scott, and from Louisiana Hall of Fame founder Lou Gabus. Appropriately enough, the film's climax documents the actual crowning of a new zydeco king, though that crowning, too, was immediately contested, and Mr. Delafose, Mr. Jocque, and Mr. Chavis all passed away much too soon afterwards. In the end, we are left with a stunning record of the talented musicians and colorful characters who made up zydeco's true Golden Era.  Mugge made this film with the invaluable help of music director Scott Billington of Rounder Records, and it was widely praised during its original theatrical release.  For instance, Gene Seymour of New York Newsday called it "both a cunning little comedy of manners and a sweet-tempered celebration of American roots music," and Larry Worth of the New York Post wrote that it had "more colorful characters than all of Hollywood's summer offerings combined."

Rhythm 'N' Bayous: A Road Map To Louisiana Music (2000) is Mugge's loving survey of the diverse musical styles and genres of the entire State of Louisiana. Stephen Holden of the The New York Times said, "To describe the recent films of the documentarian Robert Mugge as cultural reference books doesn't mean to imply that these explorations of the musical byways of Southern rural America are lacking in pungent musical sap. It's the careful balance between music and scholarship that lends Mr. Mugge's films a foundation of academic seriousness that flirts with dryness without becoming mired in trivia. Documents of a flourishing below-the-radar culture, often involving musicians who won't be around much longer, they are archival records as well as entertainments. For every obscure blues or folk musician shown performing in his films, there is usually an expert standing by to explain where this artist or group stands on the family tree of American vernacular music. Instead of concentrating on the trunk and larger branches, Mr. Mugge likes to examine the smaller branches and even the twigs. In his new film, Rhythm 'N' Bayous, Mr. Mugge returns to the South (this time to Louisiana) to compile a singing dictionary of the state's roots music styles and assorted hybrids, from the blues to 'swamp pop' to the fusion of Cajun, Creole and rock 'n' roll known as zydeco. Part musical travelogue, part anthology, part archival document, Rhythm 'N' Bayous is a rambling journey loosely divided into four sections. Begun as the official chronicle of a Rock and Roll Hall of Fame bus tour...it turns into a more informal, out-of-the-way journey to blues and zydeco clubs, gospel churches and radio stations, and musical family gatherings in backwater bayous. A number of the performances are as rough-hewn as the tiny clubs in which they are filmed. But Rhythm 'N' Bayous is finally not about being polished. It's about the organic process by which a culture expresses itself though music and the hybrids that evolve naturally when these cultures begin to mingle. That, after all, is how rock 'n' roll was born."  Among the many featured artists are Kermit Ruffins, Frankie Ford, Rosie Ledet, Dale Hawkins, Henry Gray, Henry Butler, Nathan Williams, Warren Storm, Claude King, Hackberry Ramblers, La Famille Viator, and Rod Bernard. 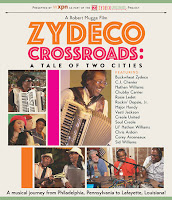 The three separate video releases also include exciting bonus materials.  For instance, the Zydeco Crossroads Blu-ray includes Rosie's in the House Tonight (2015), Mugge's 55-minute portrait of zydeco artist Rosie Ledet, which also was made as part of the Zydeco Crossroads project.  Similarly, the Blu-ray of The Kingdom of Zydeco comes with Iguanas in the House (1996), Mugge's 27-minute portrait of roots rock band The Iguanas, as well as two "making of" clips featuring Mugge and music consultant Michael Tisserand.  Finally, the Rhythm 'N' Bayous DVD features bonus audio of additional songs recorded for that film and one other.