“An Evening With Wild Man Fischer” To Be Released On CD For The First Time Ever! 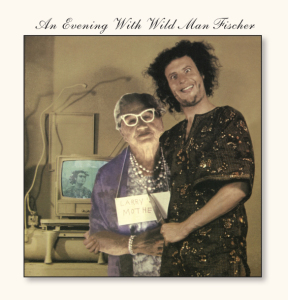 For the first time ever, legendary underground classic “An Evening With Wild Man Fischer” produced by Frank Zappa will be released on CD by Gonzo Multimedia! The album has been out of print for decades and original vinyl copies are highly sought after!


Born Larry Wayne Fischer in Los Angeles, California, Wild Man Fischer was institutionalized at age 16, and later diagnosed with two mental disorders, severe paranoid schizophrenia and bipolar disorder. Following his escape from the hospital (he said no one ever bothered to take him back there), Fischer wandered Los Angeles singing his songs a capella for 10 cents each to passers-by. Discovered on the street by Frank Zappa, with whom he recorded his first album in 1968, Fischer became an underground concert favorite. Zappa was responsible for Fischer’s initial foray into the business of recorded music, an album called “An Evening with Wild Man Fischer”, which contained 36 tracks, some of which contained musical accompaniment by Zappa and some of the Mothers of Invention members, and others featured Wildman Fischer solo.

Tracks:
Disc One
The Basic Fischer
1. Merry-Go-Round
2. New Kind of Songs for Sale
3. I’m Not Shy Anymore
4. Are You from Clovis
5. The Madness of Ecstacy Larry’s Songs (unaccompanied)
6. Which Way Did the Freaks Go
7. I’m Working for the Federal Bureau Of Narcotics
8. The Leaves Are Falling
9. 85 Times
10. Cops and Robbers
11. Monkeys Versus Donkeys
12. Start Life over Again
13. The Mope
14. Life Brand New
15. Who Did It Johnny
16. Think of Me When Your Clothes Are Off
17. Taggy Lee
18. Rhonda
19. I Looked Around You
20. Jennifer Jones
Disc Two
Some Historical Notes
1. The Taster
2. Story of the Taster
3. The Rocket Rock
4. Explanation and Dialog
5. Dream Girl
6. Dream Girl Explanation
7. Serrano Beach
8. Success Will Not Make Me Happy
9. Wild Man on the Strip Again
In Conclusion
10. Why Am I Normal
11. Wild Man Fischer Story
12. Balling Isn’t Everything
13. Ugly Beautiful Girl
14. Larry and His Guitar
15. Circle
16. Larry Under Pressure