Those lucky enough to score a "miracle" ticket to the Fare Thee Well concerts this summer were treated to some potent psychedelic jams during the shows' intermissions. The mysterious group behind those freewheeling tunes was Circles Around the Sun, a band convened by guitarist Neal Casal specifically for the project.

INTERLUDES FOR THE DEAD was released November 27 and is available on LP, CD & digital formats.

The project began when Casal was asked by video director Justin Kreutzmann to compose and record more than five hours of original music to be played along with the visuals Kreutzmann was preparing for the Fare Thee Well intermissions. "The idea was to not only show reverence for the past but to ultimately, move it forward. If there's anything to be learned from the Grateful Dead, it is to dissolve your boundaries, push your limits, and discover your own voice in this world," explains Casal, the lead guitarist and co-songwriter for the Chris Robinson Brotherhood and part-time member of Phil Lesh & Friends.

Casal was joined in the studio by keyboardist Adam MacDougall, a fellow member of Robinson's Brotherhood and Lesh's Friends. The balance of Circles Around The Sun consists of bassist Dan Horne (Beachwood Sparks, Jonathan Wilson) and drummer Mark Levy (The Congress). All of the music on INTERLUDES FOR THE DEAD was written collectively — with nothing prepared beforehand or added afterward — and recorded live by engineer J.P. Hesser.

Before attending the first Fare Thee Well concert in Santa Clara, no one in the group knew quite what to expect. "We figured it would be low-volume background music that people would ignore in their eagerness to hear the headliners," Casal recalls. "Fine by us, we were just there to dance and dig the music anyway. It was the surprise of our lives to find out just how wrong we were." 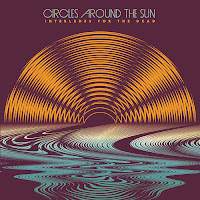 The songs were composed and recorded during a two-day jam session. The results were so captivating, and the audience response so overwhelmingly positive, Rhino decided to give the music a proper release.