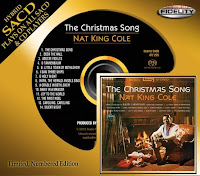 With the Christmas season right around the corner, Marshall Blonstein's Audio Fidelity is releasing Nat King Cole's holiday classic The Christmas Song on limited edition SACD. Nat King Cole's flawless vocals combined with ever so sweet orchestrations and choral backings, provide a collection of standard Christmas carols, hymns and songs that gloriously captures the spirit of the season. Without fireworks, improvisations, catchy rhythms, or unusual variations, Cole sings songs full of love in his relaxed and unpretentious style. The orchestra and chorus under the direction of Ralph Carmichael are used to highlight Cole's vocal interpretations, instead of making their own statements, and the use of bells, bell lyre, flutes, and harp add depth to the background while adding emphasis to the lyrics.

The title track, beautifully sung to an accompaniment of piano and strings, has always been Cole's biggest Christmas hit, it has remained a perennial and is possibly his most widely heard record.

There are other superb tracks including a stirring rendition of “Adeste Fidelis” in the original Latin. “O Holy Night,” with a 27-string orchestra, maintains its sense of quiet awe. Add to that favorites like “Deck the Halls,” “O Little Town of Bethlehem,” “Hark, the Herald Angels Sing,” “Away in a Manger,” “Joy to the World,” “Silent Night” and “O Tannenbaum” (in its original German language). The soothing and thoughtful “A Cradle in Bethlehem” is a perfect lullaby and the cheerful “Caroling, Caroling” conveys its snowy frolic in a wonderfully scenic, slightly bracing spirit, and Nat's jaunty rendering of “I Saw Three Ships” and “The First Noel”are sung with an a cappella chorus.

The Christmas Song was the best-selling holiday album released in the 1960s, and was certified by RIAA for shipments of 6 million copies in the US. According to BMI “The Christmas Song” is the most-performed Christmas song of all time. This is a masterwork, plain and simple, traditional and restrained, Cole's album honors the season and its message.