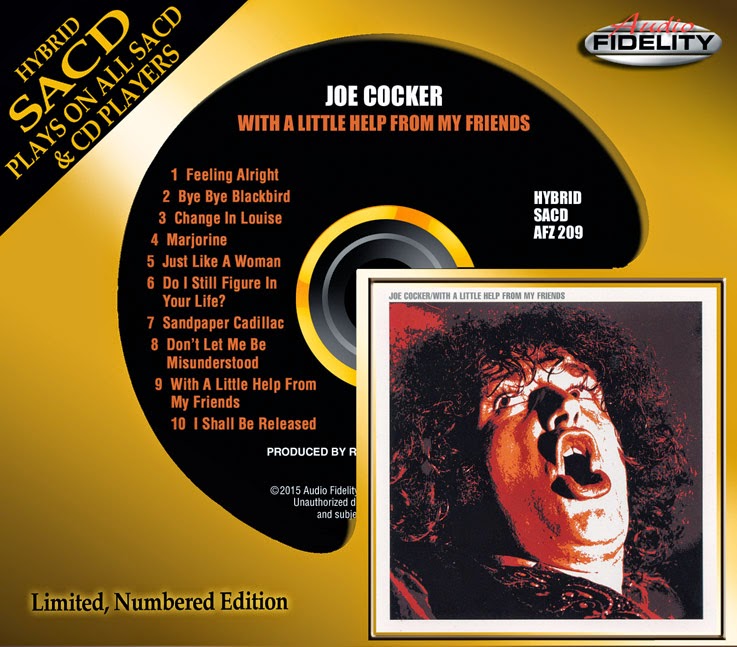 In honor of music legend Joe Cocker's recent passing, Marshall Blonstein's Audio Fidelity is releasing his 1969 album, “With A Little Help From My Friends”, on hybrid SACD.

The critically acclaimed album is one of those rare debuts that really captures an artist at their prime. The album is strong and confident and in many ways peerless and impossible to classify for it's a little bit of rock, blue-eyed soul, blues and pop rolled into one soulful rasp of a voice that results in a profound listening experience.

Besides the classic Beatles cover tune the album includes brilliant interpretations of material from Bob Dylan and Dave Mason as well as three originals. Cocker performed his radical re-arranged version of “With A Little Help From My Friends” at Woodstock and the tune was included in the popular “Woodstock” documentary film. In 2001 his totally gospel fueled rock 'n soul re-harmonization of the Beatles classic was inducted into the Grammy Hall of Fame.

1 Feeling Alright
2 Bye Bye Blackbird
3 Change In Louise
4 Marjorine
5 Just Like A Woman
6 Do I Still Figure In Your Life?
7 Sandpaper Cadillac
8 Don’t Let Me Be Misunderstood
9 With A Little Help From My Friends
10 I Shall Be Released

With a Little Help From My Friends