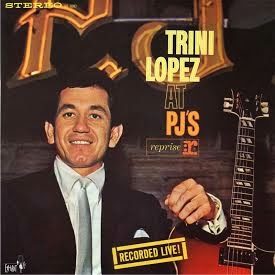 Exhibit Records announces the release of a Special 50th Anniversary Numbered Limited Edition album of Trini Lopez, "At PJ’s." The 200 gram vinyl record is beautifully presented in a sturdy old style gatefold jacket featuring the original album art work and for the first time includes the lyrics to all the tunes. The back of each album is foil-stamped with its unique number.

With the release of this album in April 1963 Trini Lopez became one of the biggest singing stars of the Folk Revival. Trini Lopez, "At PJ's" made it to #2 on the Billboard charts and stayed in the Top 40 for over a year. The album included the chart-topping "If I Had a Hammer" which reached number one in 36 countries and was a radio favorite for many years. The hit single sold more than 4 million copies and the album sold over a million and was awarded a gold record.

This was the album that made Lopez an instant success and the live party-a-go-go atmosphere of the record did much to put Trini's likable energy over the top. What Lopez did, at the head of a trio was to make folk-pop swing. Other songs include "This Land Is Your Land," and "Gotta Travel On." It could be surmised that by treating such material in this fashion, Lopez had a tiny influence upon the subsequent folk-rock movement...though, Lopez was more the all-around entertainer with a Latin lilt than he was a pure folk singer, so you also get "America" (from West Side Story), "La Bamba," Ray Charles' "What'd I Say," "Volare," and "When the Saints Go Marching In."

The emergent Exhibit Records has rapidly curated an eclectic catalog of classic recordings and is gaining notice for exquisite mastering, high quality pressings and detail to the fine art of exceptional package design.

Side One:
A-me-ri-ca
If I Had a Hammer
Bye Bye Blackbird
Cielito Lindo
This Land Is Your Land
What'd I Say

Side Two:
La Bamba
Granada
MEDLEY:
Gotta Travel On
Down by the Riverside
Marianne
When the Saints Go Marching In
Volare
Unchain My Heart