Rare Concert Recording Of Classic Rock Legends Captain Beyond 'Live in Texas October 6, 1973' To Be Released On CD & Double-LP By Purple Pyramid Records May 21, 2013 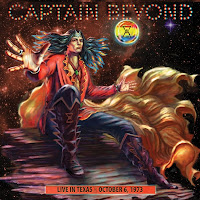 Purple Pyramid Records will be releasing a vintage live recording of legendary classic rock band Captain Beyond 'Live in Texas October 6, 1973' on May 21, 2013 on CD & Double-LP. One of the most underrated classic rock bands of the early 1970's, Captain Beyond were considered a 'supergroup' of sorts at the time and featured original Deep Purple lead vocalist Rod Evans, former Iron Butterfly guitarist Larry 'Rhino' Reinhardt and bassist Lee Dorman, and ex-Johnny Winter drummer Bobby Caldwell. Although the band only lasted three critically acclaimed albums and several tours of the US and Europe, the band's following is as strong today as it was back in their heyday! Now with the release of this rare sought after concert recording on CD and vinyl for the first time, fans can relive the magic that was Captain Beyond in concert! Recorded just after the release of the group's second album 'Sufficiently Breathless', Captain Beyond 'Live In Texas' captured the band while on tour with King Crimson.

"This was an exciting night of music! Captain Beyond at the University of Texas in Arlington... All the best..." - Bobby Caldwell

The amazing liner notes were written by famed rock historian Dave Thompson. Through extensive conversations with Bobby Caldwell, the story of Captain Beyond unfolds, including listening parties with the Allman Brothers, the unusual signing to Capricorn Records, and a fruit-flinging show with Sha Na Na!
For more information: www.CleopatraRecords.com