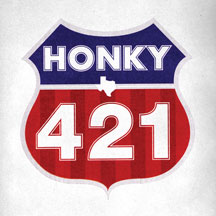 Once again HONKY serves up another heapin' helpin' of 'Texas Super Boogie' with their new album 421. Mixin' butt wigglin' grooves, good time lyrics, and lots and lots of guitar... The tried and true recipe of the HONKY sound.

Put a helmet on before opener WFO lives up to its name and starts kickin some dirt and rocks up your direction with double vocals and in your face guitar. JUST A MAN is a hard drivin' lesson about the unfortunate realities of relationships that hits ya happily in the gut. Bobby Ed steps up, bringin' the epic ALL FOR NOTHIN' to life with heartfelt lyrics and beautiful guitar work. WOKE UP DEAD shows another side of HONKY with finger picked blues guitar and JD Pinkus' raspy vocals, over a nice greasy groove (approved by asses everywhere). OVER EASY is a sleazy lil' love song about rough sex and breakfast, strung together as only HONKY can.

Served well with a box of wine and spread over ramen, there is no filler on this much awaited album by this hard drivin trio.