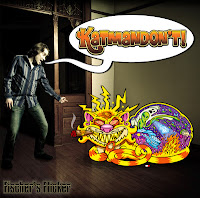 One of the most eclectic releases of the year has finally hit the shelves, Fischer's Flicker's debut CD “Katmandon't” - an unusual assortment of weirdness and musicality that sets the album (and group) in a class by itself. Formed by musician Scott Fischer, whose brain is like a vast musical amusement park, Fischer's Flicker is his latest artistic brainchild, and marks the next step in a musical evolution that began over 15 years ago. While Fischer's Flicker's debut album is certainly more “mature” sounding than his previous efforts, containing none of his trademark humorous rock tunes, it stays true to the core of Fischer's music with big melodies and ambitious composition. This, coupled with live performances that include extravagant and imaginative video installations that sync up with the band's live performance, will make you want to jump right back in line for another ride!

“When writing for the new CD, I didn't make a concerted effort to get 'more serious' on the release,” Scott explains, “it just came out that way. This is the first album released to-date without any 'joke tunes' on it. My lyrics seem to have become more honest/open than ever before. Not that they weren't prior, but songs like 'Souls', 'Wound Up Being Me' and 'Ex-Birthday' had me really telling it like it is, where I would tend to hide meaning in humor in the past. It definitely seems to deal with more mature concepts than my prior releases, which only makes sense given some of the heavy hands that were played in life during the process of this recording.”

Scott Fischer, a Chicago native, has been writing and performing music since he was a teenager. In 1994, he founded Deja Voo Doo, and in 1998 released 'Carpe P.M.: Honor Comes Only After Humility', a highly ambitious concept album whose success led to Fischer's involvement in Zappening 2000 (a tribute festival to Frank Zappa). It was during the shows to support the release of 'Carpe P.M.' that Fischer began to develop and refine the multi-media aspects of his live shows including custom-designed “living TV heads” that synced up to the band's live performance. Says Scott, “It frustrated me to see people in attendance of a live show and giving a solid 8 collective minutes' worth of attention to the act, intermixed with catching up with old acquaintances, refilling cocktails, relieving cocktails, smoke breaks, etc. I wondered how I could find a way to capture, say, 16 minutes' worth of attention. I felt that I needed to hit the audience with another sense in addition to wowing their ears. Right between the eyes was the answer! I grabbed hundreds of hours' worth of B movie sci-fi, student films and documentaries and then, in turn, spent hundreds of hours myself creating videos that evoked emotions pertinent to the songs they were created to sync up with. The videos are definitely a big part of the live show and what hopefully separates us from the others.” In order not to lose the “organic” feel in concert, a live VJ was employed to take on the painstaking task of “vari-speeding” the videos to correlate with the live band.


After several years of writing and performing, Deja Voo Doo evolved into Powderhouse and then Babaganoo. After a hiatus, Scott Fischer formed his latest musical vehicle Fischer's Flicker; a band comprised of Deja Voo Doo alumni including Mario Licciardi and Tim Kubiak on guitar, Turan Yon on bass and Tim Gavin on drums. And now Fischer's Flicker's debut CD “Katmandon't” is ready to turn your universe upside down! “I have always strived to do something different with my material,” says Scott. “Not only from others out there but from my previous material as well. Inevitably, I always end up having an 'opus' of sorts on each release.”