Random Touch’s 'Flock' Concludes Their Career With a Bang 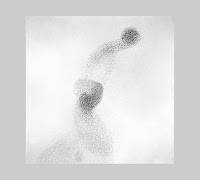 Thirty-three years of collaboration and sixteen releases culminates in the masterpiece Flock, Random Touch’s final album. The ten tracks range from the bigger-than-life “Arena” to the uninhibited joy of “Dance of the Elementals” to the psychedelic final track, “She Wore Sheepskin”. In-between is found all manner of genre bending complexity and unnerving cinematic suspense.
Scott Hamill’s mastery of the bass guitar is notable on the album. Its pervasiveness recreates the traditional jazz trio, and yet jazz could be said to take a back seat to both 20th century classical and rock on this album. Much of the drum play is on an Ayotte set versus the DW kit that served for the previous releases, and the album also contains an unprecedented live track (# 6). The result of these changes is a freshness and newness that belies the band’s long history and propels the album to new heights.
“Poly-sound, across rhythm, melody and harmony, casts this music into a space between the atoms, tracing tangential connections that align to a sound residing deep down and out of sight.” – Christopher Brown, drums
Singular as the music of Random Touch is, there is little they do that has not been done within the 20th century classical “tradition” or the rock and jazz idioms. It is simply their willingness to take risks and their unique embracing of the unconscious and serendipity that sets them apart from most of their contemporaries.
“From screaming crowds to whispers. We’ve come together to define our wall of sound.” – James Day, keyboards
'Flock' is available www.RandomTouch.com