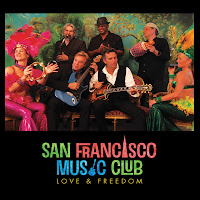 Veteran performers and recording artists Jimmy Dillon and Lorin Rowan have been playing music for many years, and now they rejoin forces with a group of talented singers and players to form San Francisco Music Club. Their new album, titled "Love and Freedom", is a journey through the back roads of some of the great music traditions and cultures in the US, Caribbean, and Africa. The group’s official CD release party will be held at the legendary Sweetwater Music Hall in Mill Valley, California on May 5th, 2012, and will feature a myriad of guest performances by some very talented musicians.

The San Francisco Music Club, led by Dillon and Rowan (who were founding members of Marin County’s own The Edge), have now transformed their high energy rock/reggae sound into an exciting and colorful cross pollination of styles and genres; a world music experience that draws from Afro-Cuban/Hi-Life, funky New Orleans grooves, R&B, and classic Jamaican roots music reminiscent of Bob Marley & The Wailers or Toots and the Maytals. Think Paul Simon’s Graceland with an extra helping of Red Beans and Rice, a side of Gumbo, and a Red Stripe. 21st Century Americana meets Contemporary Rock!


Paul Liberatore from the Marin Independent Journal says “Dillon and Rowan are consummate singers and guitarists with a long and impressive history in Marin, but they chose to identify with San Francisco in their band name to give their ensemble a broad appeal. For this new venture, they've brought in bassist Eric McCann, drummer Matt Willis, Michael Peloquin on saxophone and harmonica, Jeff Lewis on trumpet and percussion and singer Sakai. This is a crack band comfortable in the variety of styles showcased on this sparkling San Francisco Music Club debut CD, a culturally rich, exquisitely produced and finely polished album that gives world music an accessible, fresh and fun new sound.”


The San Francisco Music Club brings to the stage an explosive rock-steady rhythm section with fiery guitar interplay, sax & trumpet wrapping around the soulful vocals of Dillon’s baritone growl and Rowan’s clear tenor, along with special female guest singer Sakai who has worked with Train, Stevie Wonder and Santana.


Dillon and Rowan are no strangers to the big stages across the world. Dillon has performed and recorded with Clarence Clemons, Bruce Springsteen, John Lee Hooker, BB King, and Sting and has toured extensively in Europe. He also wrote “Ascension of the Blues”, a critically acclaimed musical that was the original inspiration for the San Francisco Music Club concept, along with his and Rowan’s desire to take their former Marin County Rock/Reggae band The Edge into a wider international musical experience. Rowan is a Grammy award winning songwriter and longtime member of The Rowan Brothers (Peter & Chris) and has worked with Jerry Garcia, Phil Lesh, Steve Miller, Levon Helm, Little Feat, David Grisman and Stephane Grapelli, and has toured internationally as well. Together these two and their band of monster musicians bring a fresh sound to what some would consider an “old” scene. They bring people to their feet, and get the crowd dancing from the first note.