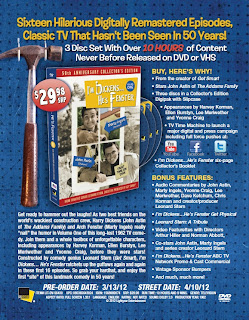 Lightyear Entertainment, in association with TV Time Machine Productions, is proud to announce that the brilliant but short-lived 1962 ABC TV situation comedy, I’m Dickens…He’s Fenster, starring John Astin and Marty Ingels, will be released on April 10, 2012, through eOne Distribution.

The I’m Dickens…He’s Fenster Golden Anniversary three-disc set contains over 10 hours of content. It features the first sixteen episodes of thirty-two from the show’s only season, and includes the following:

I'm Dickens… He's Fenster followed the comic exploits of two construction workers and bosom buddies (played by John Astin and Marty Ingels). After producing thirty-two side-splittingly hilarious episodes, and despite critics' raves in The New York Times, The Hollywood Reporter and Time Magazine, the show was prematurely canceled in its first season. By the time its final ratings came in, showing it having beaten Sing Along with Mitch and Route 66 for its time slot, it was too late to reassemble the cast, who had moved on to other projects. The successful and beloved show had become a casualty of timid programming and unlucky timing.

In addition to being creator, writer, director and producer on I'm Dickens…He's Fenster, Leonard Stern's remarkable career included writing for the Abbott and Costello and Ma and Pa Kettle movies, and the classic TV shows The Honeymooners, Sergeant Bilko and The Steve Allen Show. From 1965-1970, Mr. Stern was executive producer, writer and director on the classic spy spoof Get Smart (starring Don Adams and Barbara Feldon). He also created, produced and directed the TV series He & She (co-starring Richard Benjamin and Paula Prentiss) and McMillan & Wife (starring Rock Hudson and Susan St. James). He also co-created the immensely popular series of children's game books, Mad Libs.

2012 is Lightyear Entertainment’s 25th Anniversary year, since its origin in the management buyout of RCA Video Productions in 1987. eOne Distribution is a leader in the distribution of entertainment products through partnerships with the world’s largest physical and digital retailers.