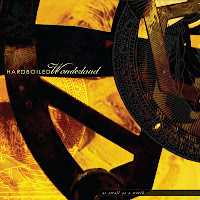 Electronic duo Hardboiled Wonderland, featuring Martin Birke (synths, samples, electronic percussion, drum programming) and Percy Howard (lyrics, vocals, vocal samples), are proud to announce the release of their highly anticipated debut album 'As Small As A World And Large As Alone'. The CD is distributed through UK label Gonzo MultiMedia, the innovative company that releases an eclectic variety of CDs and DVDs from a number well-known artists and record labels, spanning rock, prog and pop music from the '60s to today. Hardboiled Wonderland, a name derived from half of the title of one of Birke and Howard's favorite novels by Haruki Murakami ('Hardboiled Wonderland and the End of the World'), describes their music as 'New-Electro-Soul' or trip-hop. The album was produced by the duo along with Christopher Scott Cooper (guitars, samples and engineering) at Blue Seven Audio in Fremont, CA, with contributions by Benito Cortez (viola, violins), Edo Castro (7-string basses) and Tara C. Taylor and Essence on backing vocals. Each of the 10 tracks on the CD not only show Birke and Howard's talents as musicians, but also their intense passion for creating adventurous music. From the sultry, emotionally charged title track to the infectious dance beats of “Jungle Fever” and “Looking For Strange”, the trip-hop of “Filthy” and “I Carry Your Heart”, Hardboiled Wonderland's debut release is bold, delicate and introspective.

“The inspiration behind our new album was to create a hybrid of electronica and soul music which we call 'New-Electro-Soul' music,” explains Martin. “I composed and played all the music and Percy wrote the vocals / lyrics... We really clicked together. I'd say we call the band Hardoiled Wonderland as it reflects our influences and incorporates different styles of rock/pop, blues and modern dance, basically a 'wonderland' of a collection of songs and styles.” Influences are vast as they are different including the likes of Massive Attack, Depeche Mode, Barry Adamson, Kraftwerk and Scott Walker.


Prior to forming Hardboiled Wonderland, both Birke and Howard were already established musicians in their own right, hailing from Sacramento, CA. Percy Howard, no stranger to musical performance, was the singer in the local band NUS, who released two CDs, both produced by Bill Laswell, on the Sub Rosa label. Howard is also the driving force behind the Meridiem Project, which has included collaborations with Bill Laswell, Vernon Reid, Buckethead, Charles Hayward, Fred Frith, Jarboe, Happy Rhodes, Trey Gunn, Robert Rich, Jill Tracy, Eraldo Bernocchi and Oz Fritz, amongst others. Composer/producer Martin Birke, whose adept technical skills allow him to create richly textured electronically-based compositions, is the writer and director of the studio project Genre Peak. He has created commissioned scores for the Alvin Ailey American Dance Theatre, the Oxygen Network and Lions Gate Films ('Blood, Guts, Bullets and Octane', 'Retribution'). Martin has also co-scored two films in collaboration with the band Sandbox Trio ('Animals' and 'Heartbeat') in addition to touring and recording in Europe with the bands Casualty Park and Sandbox Trio (Frank-Mart-Arts label).