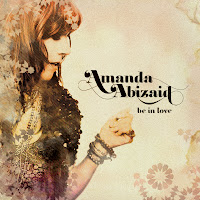 You've heard her enchanting voice on hit TV shows and films such as 'The 4400', 'Odd Girl Out', “Smallville', 'Ed', 'One Tree Hill', 'Felicity' and 'Charmed'. Now singer, songwriter and multi-instrumentalist Amanda Abizaid is preparing to release her highly anticipated new (physical and digital) EP titled 'Be In Love' on October 11th, 2011. One of Hollywood's most in-demand “Female-Vocalist-for-Hire”, Amanda's new EP in many ways is a watershed for the American/Lebanese music artist, with her songwriting reaching a new level of creativity.

“This is a special record for me,” Amanda expresses, “because in finding my voice as a songwriter in prior releases I was inspired by other songwriters to work in their genre, which allowed me to mature as an artist enough to relinquish control to a production team that has allowed me to find my own voice. This EP is all about going back to my roots and expressing the influence of the American culture that I have been living for a while now. There is a marriage between the two cultures that is really being expressed in this EP that makes me feel complete with my sound today”

Amanda describes her music as “Neo-Soul meets World music, the cultural vibes of the roots along with percussion aspects add to the sophistication in the songwriting. The music has a 'pop' element because of the type of songwriting I am doing with Grammy Nominated Songwriter and Recording Artist Harriet Schock. As we were developing the sound of the record with producer Andrew Michael Bertrand, we realized that it sounds as though Peter Gabriel and Sade had teamed up to make a record. The pulse of this record is derived from Amanda's love of World music.” Also appearing on Amanda's new release is Santana's trumpeter Bill Ortiz and Emmy Award Winning film composer Alex Wurman, who greatly enhanced the songs with his string compositions and piano performances.

“This whole process has been really inspiring to me,” Amanda reflects. “I am excited for this release date because I feel the music is going to reach a much broader audience here in the US and around the world. I have really found my sound.”


A gifted pianist, guitarist and flautist, Amanda Abizaid was born in Beirut, Lebanon to an American mother and Lebanese father. Upon relocating to Los Angeles in the '90s, Amanda immediately began working with some of the best musicians on the scene. She gained major notoriety when she lent her voice to “A Place In Time”, the haunting theme song from Paramount's TV series 'The 4400', which premiered in 2004. Amanda's CD release of 2010 'This Life' garnered rave reviews from fans and music press alike worldwide! Brian Ball of Woman's Radio touted “'This Life' is the perfect half-hour escape from the boundaries of time and space altogether,” and Paul Fleck, former Executive Director of Marketing of Paramount Pictures' Motion Picture Group praised, “ 'This Life' is unquestionably her most accomplished work to date...” Tapping into her early musical influences from her childhood, Amanda infuses a sensual and seductive Middle East flair to her work.


In addition to completing her new EP, Amanda recently hosted a World Music Night at Los Angeles M-Bar with proceeds that were donated to New Orleans' Make It Right NOLA Foundation. “I like to help people through my music,” Amanda recently told Billboard. “I've always done that; coming from Lebanon, that's what I always wanted to do. I wanted to do something bigger than just myself because I saw a lot of tragedy growing up. Through my music, I hope to reach people and inspire them to make their lives great.”


Amanda Abizaid 'Be In Love' EP will be available for purchase on October 11th, 2011. The EP also includes two bonus tracks: “Blue Sky Remix” and an instrumental version of “Be In Love With Me Again”, which showcases the trumpet work of Bill Ortiz.