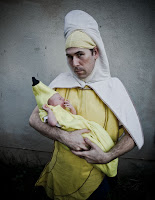 Keith Lowell Jensen may be the "Atheist Comedian," but he's oh so much more. He's heading out on a West Coast Tour this September and October to support the release of Cats Made of Rabbits on CD and DVD, his brand new stand-up comedy release.

On Cats Made of Rabbits Jensen returns to his hometown and spews utterly sincere filth for over an hour. He presents the best, or at least the most obscenity laden, yet still scientific arguments to use against creationists. He also shares his dirtiest, most disturbing and most innocent childhood memories and manages throughout to keep his wretched blasphemy kind and full of love.