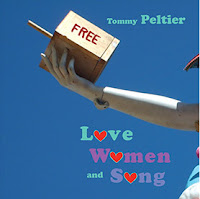 Jazz aficionados and music enthusiasts worldwide are buzzing with the new solo release by legendary Jazz Corps founding member Tommy Peltier. An eclectic mix of rock, bop, pop, classical and jazz, Tommy Peltier's 'Love, Woman and Song' is an unexpected sonic adventure from the former jazz cornet virtuoso turned vocalist.
“The concept for this solo album was to be free and explore many genres,” explains Tommy. “With the subjects love, the women in my life and music, made it pretty easy, that's the story of my life. Touching on different types of music made it more interesting and fun.” Five of the songs from Tommy's debut CD have accompanying dance videos with The Rudy Perez Performance Ensemble currently posted on his website.


The story of Tommy Pelier is a fascinating one, starting out in the early 1960's as a premier jazz cornet player in the celebrated jazz ensemble The Jazz Corps and then having to switch to vocals due to an injury. The Jazz Corps were formed in 1963, the name inspired by President Kennedy's creation the Peace Corps. The groups credo: Jazz without borders is true freedom. (A CD of early recordings titled 'Jazzheads' was eventually released in 2010.) Howard Rumsey, who owned The Lighthouse club in Hermosa Beach, CA hired the band on a regular basis. Live recordings of The Jazz Corps at The Lighthouse were eventually issued on CD. In 1966 Pacific Jazz took the band into the studio with guest jazz giant Rashaan Roland Kirk and recorded their debut album entitled 'The Jazz Corps under the direction of Tommy Peltier featuring Roland Kirk'. The album featured Freddy Rodrigues on reeds, Lynn Blessing on vibes, Bill Plummer on bass, Maurice Miller on drums, Peltier on cornet and Kirk on tenor, flute, manzello and stritch. Downbeat magazine at the time raved about the group's talent: “This is a group that could appeal to the youngsters of the flower generation as well as listeners of longer standing. It is a group of today, combining essences and aspects of Ornette Coleman, Miles Davis, and The Beatles and nonspecific Latin elements. With Kirk in fine form, this is an album to which you should open your ears and hearts.” The album was reissued by EMI on CD in 1994.


“Toward the end of the '60s, do to an internal injury to my right side, I could no longer play the trumpet,” Tommy related. “My great love for 25 years was to be, no more. Needless to say this was a heartbreaker. Encouraged and inspired by my friend Judee Sill and others, I started singing and playing guitar. Since I never sang before, it came out like I played horn, different. This was a new beginning and I've been enjoying it ever since.”


“Some of my earlier heroes and still are were Gerry Mulligan, Chet Baker, Clifford Brown, Ornette Colman Quartet and Miles' bands,” says Tommy. “These inspirational icons opened new doors for us to look at with fresh ears. Then when I started singing I found Neil Young, Joni Mitchell and Judee Sill to be very inspiring and a complete package unto themselves. Not just good vocalists, but great songwriters and musicians. And through the years, thank goodness, the good music keeps coming with David Bowie, Bjork, Portishead and Radiohead.”


In the early 1970's Tommy partnered with his good friend and folk legend Judee Sill and put together a number of folk-rock groups. A CD with Quicktime videos from that period came out for the first time in September 2005 titled 'Chariots Of Astral Light' Tommy Peltier featuring Judee Sill (Black Beauty Records). In 2007 more recordings from the early '70s along with some new songs were released on a CD entitled 'Now and Yesterday' (Plastic Echo Records). In the 1980's Tommy worked and recorded with such music legends as Don Preston from the Mothers of Invention and Robby Krieger of The Doors.


By the '90s Peltier formed the Plastic Theatre Art Band, an avant-garde pop performance group who performed in various clubs and concert halls throughout Southern California. “We performed with prominent dancers and companies such as The Rudy Perez Performance Ensemble and The Los Angeles Modern Dance and Ballet,” says Tommy. The CD 'Live at Luna Park' was released in 1995, Herman's, Germany. Rolling Stone praised the release: “Plastic and Art; these are the poles in which Peltier and his freestyle project Plastic Theatre Art Band impishly swing... a global sound circus...cloudy dream poetry fusing perfectly lofty music.” Tommy Peltier's Plastic Theatre Art Band 'March Of The Nematodes' was released in 2001 (Plastic Echo Records) and 'Here Today 2008', an album about Tommy's home town of New Orleans and other areas in LA, released 2008 (Plastic Echo Records).


Which brings us to the new CD release by Tommy Peltier 'Love, Women and Song'; vastly different than any of Tommy's other releases, the new album promises to please and fascinate those who take the chance to listen.
For more information or to hear long samples of songs from the new CD visit the official website at www.TommyPeltier.com